What kind of a villain was Śakuni mama?

One of the greatest things about the Mahābhārata is its recognition of the complexities of ‘dharma’ and its portrayal of moral dilemmas. That good people can do bad things and vice versa. Popular renditions of the epic have us sympathising with Karṇa – he who suggested that Draupadi be disrobed (MBh 2.68.38). Some of us even empathise with Bhīṣma who was present and powerless to stop the heinous act. We nod understandingly when Arjuna kills the un-armed Karṇa (MBh8.91). And with Kṛṣṇa of course all deviousness and trickery is forgiven, because he is our divine darling1. We even find it in our hearts to feel sorry for the blind Dhṛtarāṣṭra deprived of the crown, not to mention Duryodhana, who consequently has kingship snatched away from him, which by primogeniture would have been his. 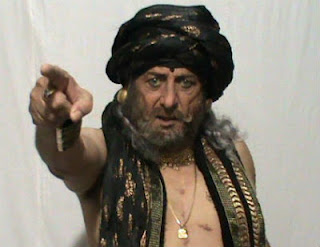 But the one character who is universally reviled is Duryodhana’s maternal uncle Śakuni. Is Śakuni really the villain he is always made out to be? His villainy is chiefly predicated on his role in the game of dice through which Duryodhana wins everything from his cousins, the Pāṇḍavas. In this post, I attempt an alternate portrayal of Śakuni. A loving brother. A concerned uncle. An expert at the game of dice. An upright man, and a warrior who fights as valiantly as any other during the war, and eventually makes the ultimate sacrifice for his beloved nephew.

It would not be completely hazardous to suggest that Śakuni left his own kingdom unattended to be by the side of his sister who had chosen to blindfold herself for life, and that he loved his nephews2. That said, our story begins when Duryodhana has just attended the Rājasūya sacrifice of his cousin Yudhiṣṭhira. The homage paid to the Pāṇḍavas by countless kings, the unimaginable wealth brought as tribute, and his humiliation in the magical palace wound Duryodhana deeply. Belittled, and burning with jealousy and envy, he is inconsolable and pretty much suicidal3. Śakuni first reasons with him – reminds him of his own good fortune, his own wealth, his loving brothers, and his powerful loyal friends, saying there is no need for him to be jealous or distraught.4 When his nephew doesn’t relent, he suggests a non-violent, expedient way to deprive the Pāṇḍavas of their wealth. Duryodhana jumps at the chance of victory without ‘any danger to our friends and other illustrious men’.

Śakuni explains that he is an expert in the game of dice(akṣakuśalaḥ). There is no one on Earth who can play as well as him.5 He has special knowledge of the game and is superior to all in the world in it.6 He says that Yudhiṣṭhira is very fond of gambling, but he does not know how to play. And if asked to, he will not be able to refuse. Śakuni doesn't act unilaterally, insisting that King Dhṛtarāṣṭra give his consent. He does, and in turn consults Vidura who reluctantly goes to the Pāṇḍavas with the invite. The one isolated reference to cheating [(kapaṭam)2.49.40] seems to me to be an interpolation – why would Śakuni need to cheat when he is the best player in the world, and can determine the outcome of every throw? A fact, by the way, that everyone knows, including Yudhiṣṭhira.

Of course in the game, the Pāṇḍavas lose everything – their kingdom, their wife and themselves.  But not everyone thinks Śakuni cheated. Prātikāmin, who is sent to summon Draupadi blames her husband. He says – “Yudhiṣṭhira having been intoxicated by dice (dyutamadena mattaḥ) ... you have been won by Duryodhana...”7 A critical vote of confidence comes from the un-impeachable grand sire Bhīṣma who says “Śakuni is matchless in dice (dyutena-advitīyaḥ) (and) Yudhiṣṭhira has still wilfully staked with him... (and) Yudhiṣṭhira does not consider that Śakuni played with him deceitfully...(na manyate ...nikṛtim)”8 Despite being in a rage, the hot tempered Bhīma in his outburst at Duḥśāsana says - “Crooked-minded wretch...being advanced by the skill of the Gāndhāra king (gāndhāravidyayā) you dare to boast ...”9 And Bhīma's mentor Balarāma in the Udyoga Parvan clearly absolves Śakuni of any fault.10

Arjuna suggests that it was kṣatriya dharma to play, and that Yudhiṣṭhira played against his will  because he was upholding that dharma.(2.68.9).  Some scholars have argued that Yudhiṣṭhira was honour-bound to play this game – but that would have been true only if the game was part of the Rājasūya, which had long ended by the time this event takes place. In all honesty later (in the Āraṇyaka Parvan), Yudhiṣṭhira confesses to Draupadi that he had been seized by a desire to play the game of dice. During the exile which follows the game, Yudhiṣṭhira becomes an expert at dice, and spends the 13th year of exile (incognito), as Kaṅkaḥ, the brahmin, who guides Virāṭa, the Matsya king in his effort to learn the game.

Śakuni in battle: While Śakuni calls his dice his weapons, he is second to none on the battle-field, and no less loyal to Duryodhana than Karṇa. A cursory glance at MBh 8.25.18-43 gives us an idea. Śakuni ...who was acquainted with all sorts of warfare ... most desirous of winning victory ... (he) did not at all feel pain ... to behold arrows (approaching) him like throngs of locusts... Thereupon the son of Sulaba who was possessed of immense prowess ... the very sight of the son of Sulaba wandering most fearlessly on the battlefield ... he continued to slaughter the soldiers of the Pāṇḍava forces ... they were routed by the great-souled (mahātmanā) son of Sulaba.11

Śakuni meets his end in the Śalya parvan (Book 9). In popular depictions of the epic, much is made of Abhimanyu’s death (and rightly so). We even shed a tear for Karṅa – but no one bothers to re-tell the valour of Śakuni who was encircled by a wall of hostile warriors (Mbh 9.23.86-87). He is called mighty (balī), brave (śūraḥ), resplendent (pratāpvān) and invincible in battle. Sahadeva first kills Śakuni’s son (we all remember what happened to Droṅa in similar circumstances) – but  Śakuni battles on regardless, pulling out one weapon after another, as his opponent keeps cutting them down. Despite being struck by arrows ‘in all his vital parts’ he continues to fight back, till Sahadeva finally be-heads him.12

I leave it to you to decide whether or not Śakuni deserves a re-appraisal. At any rate, the key objective of this blog is - if you don't agree with me, if you don't like or believe what I have written, please learn Sanskrit, and find out for yourself!!

All verses quoted in this post are from the translation by M.N Dutt, Parimal Publications, 2008

1 “The Devious God: Mythological Roots of Krishna’s Trickery in the Mahabharata,” Elaine Fisher, Columbia University
2 Wikipedia has a story about why he left his kingdom (http://en.wikipedia.org/wiki/Shakuni) – but there is no source quoted. The ref XXXI has nothing to do with the story. 3 of my professors concur that the wiki story is not known to the Sanskrit Mahabharata. It probably comes from a vernacular version. If any of you knows where it comes from – please do let me know. Anyway it doesn’t make sense, because if he wanted the destruction of the Kauravas, why would he die on the battlefield for them??
3(2.47.31)
4(2.48.1-12)
5(2.48.20)
6(2.49.38)
7(2.67.4)
8(2.67.41)
9 (2.77.16)
10The words of Balarama from Sacred-texts.com Book V section II: “When Yudhishthira had his throne, he forgot himself by being engaged in gambling and was dispossessed by them of his kingdom. This valiant Kuru, this descendant of Ajamida, Yudhishthira, though not skilled in dice and though dissuaded by all his friends, challenged the son of the king of Gandhara, an adept at dice, to the match. There were then at that place thousands of dice-players whom Yudhishthira could defeat in a match. Taking however, no notice of any of them, he challenged Suvala's son of all men to the game, and so he lost. And although the dice constantly went against him, he would still have Sakuni alone for his opponent. Competing with Sakuni in the play, he sustained a crushing defeat. For this, no blame can attach to Sakuni.”
11See also 8.51.55, 9.23.30-32 and many other such descriptions.
12(9.28)

A couple of months ago I read Yajnaseni, a novel on Draupadi written by Oriya author Pratibha Ray. If you haven't read it, I recommend it. The thing about Mahabharata is that it is complex and layered. Nobody is all good and all evil, that is why I guess it is an excellent commentary on human nature. Like you say majority of us have read derivatives as we cannot read and understand the original text in Sanskrit......

And I am always fascinated by different perspectives. In Malayalam, there is a novel written by M.T.Vasudevan Nair called 'Randamoozham' which means second chance. It alludes to Bhima's second turn with Draupadi to spend time as her husband for one year, the entire Mahabharata is told from his perspective.

As you know when the Pandavs ascend to heaven, Draupadi is the first fall and when Arjuna asks why, Yudhishtir says it is because despite having five husbands she loved Arjuna more than the rest. I have always wondered - as you read a normal version of Mahabharata she is one of many characters, and you don't get that sense. But when you read Yajnaseni, you read about how much she yearns for Parthan who won her at the swayamvar.

I leave it at that, so I can very well imagine the much reviled Shakuni being a valiant warrior, a loving brother and and uncle.

Very interesting reading. I like the way you treat the subject. And yes I always thought of shakuni as the evil one. If possible pls mail me links to your blog when ever u put something up at rohini.modayil@gmail.com

Very interesting reading. I like the way you treat the subject. And yes I always thought of shakuni as the evil one. If possible pls mail me links to your blog when ever u put something up at rohini.modayil@gmail.com