My response to Shoaib Daniyal's article "Fact check: India wasn't the first place Sanskrit was recorded – it was Syria"

It is not my intention here to comment on what the Modi government is doing with Sanskrit. Neither do I intend to delve into the 'origin' theories surrounding Sanskrit. Nor the Central Asian Urheimat hypothesis. This response is motivated primarily by Shoaib's suggestive lead in -  "Fact Check." My simple intention is to question some of the presuppositions and 'facts' in Shoaib's article. To point out that in some places the title and subheadings of the article are at variance with his own copy. And that in my humble opinion, he has got this quite wrong.

In http://scroll.in/article/737715/fact-check-india-wasnt-the-first-place-sanskrit-was-recorded-it-was-syria Drawing on the scholarship of  David Anthony, Thomas Burrows and others, Shoaib suggests that Sanskrit was first recorded in (modern day) Syria. The basis of this claim is a treaty signed in the 14th century BCE between the Hatti and the Mittani. Other proof includes Kikkuli's  horse training manual in Hittite which has words which are similar or the same as those found in Sanskrit. He may well have added the names of Mitanni princes on cuneiform documents in Akkadian from the Bogazk6y and El-Amarna tablets.

I'm a bit surprised by the following:

1.)His own article specifies that the Mitanni were speakers of a language called Hurrian. (Not Sanskrit)

2.) The treaty itself was not scripted in Sanskrit and only bears the names (or equivalents) of 3+2 deities who are well established in the Rig Veda. The lists of the Aryan gods on the Hatti-
Mitanni and the Mitanni-Hatti treaties reads as in the picture below. You can see it is not Sanskrit, but the names are recognisable as Indra, Mitra, Varuna and the Nasatyas (From Thieme, Journal of the American Oriental Society, Vol. 80, No. 4):

3.) These deities were 'wedged between' all of the deities of the Hatti and the Mitanni.  Clearly indicating that they had their own pantheons in addition to these 5 gods. From Thieme (ibid.) 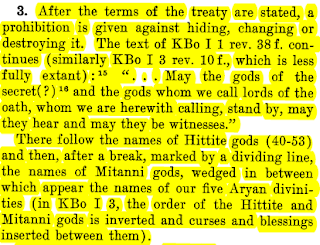 4) Shoaib says clearly that the region in question is "what is now northern Syria" - yet he has no problem in sub-heading the section "The Syrian speakers of Sanskrit" when in fact Syria/Syrians were nowhere in sight and would not come into existence for at least 3 millenia after this treaty. Quite misleading.

5) Indologists like Theodore Proferes quote the Mitanni treaty merely as a chronological marker - saying that if the Indo-Aryan gods (as opposed to Proto-Aryan;See Thieme ibid.) feature in the Mitanni treaty, and if they were worshiped for the same functions in the Rig Veda - the hymns are at least as old as the treaty. However Proferes is the first to admit that Max Mueller's dating is arbitrary and there is nothing which says the Rig Veda was not composed centuries before this date.

6) The truth is no one actually know how old the Rig Veda is, and therefore how old Vedic Sanskrit is. Or when it branched off from the Proto-Aryan language pool (assuming there was on), as did Avestan. If we are checking 'facts', the Aitareya Brāhmaṇa  suggests an alternate date. It contains a passage which refers to the shifting of the vernal equinox from the Naksatra Mrgasiras to Rohini. According to some astronomers, this event is likely to have occurred around 3500 B.C. If this is a 'fact', the Rigveda, being older than the Aitareya Brāhmaṇa would be assignable to the 4th millennium BCE (See B.B. Lal, East and West, Vol. 48, No. 3/4) 1,900 years before the Mitanni treaty.

7) Shoaib unqualified-ly quotes PIE (Proto Indo-European) as the founding language of Sanskrit. He doesn't consider it necessary to explain PIE itself is a scholarly construct and there is by no means any agreement on whether it actually existed. Linguistic scholars like N.S. Trubetskoy categorically deny its existence. Even a scholar like Ernst Pulgram who does believe that PIE existed admits, "...a procedure whereby we choose to arrive at a reconstructed proto-language, be it Proto-Indo-European or Proto-Athapaskan, by comparing languages in pairs and advancing by way of a pyramid until we have reached the summit, the reconstructed proto-language, does not in the least entitle us to believe, or postulate, that historically the reverse process-that is, a series of binary splits-actually occurred." So when the jury is still out on PIE I would be very uncomfortable with adding gravitas to an article by quoting PIE (founding language) as a 'Fact.'

I have great respect for Shoaib Daniyal but I don't agree with his reading of where and when Sanskrit was first spoken. Had he presented this article as an optional reading, I might have enjoyed it. But not as a "Fact Check." I do not claim to know the answers myself. However what little I have garnered suggests that Sanskrit was certainly not spoken for the first time in the 14th century BCE in a region that 3,000+ years later would become Syria. In fact far from what the subtitle of his article suggests, Sanskrit wasn't spoken there at all. All that has been proved is that there were linguistic similarities between Hittite, Hurrian and Sanskrit, and that a handful of the deities were shared in common with the people of the Rig Veda. I look forward to a response from Shoaib on this article.

Posted by Rohini Bakshi at 7:13 am

Facts do not matter to our SULK... so total waste of time arguing logic and facts with this lot. They put forward few words here and 2 pooteries there (as RomoilaT did in 1980's) but they are not willing to consider as fact what is written in the vast Sanskrit literature where there is zero mansion of all these fictional theories. Best to apply what Swami Vivekanand aptly advised, ie, not to feel sorry if all these theories drowned in those distant seas.

Quick question -- Why do you respect Shoaib Daniyal?

Sir,I read many a times about the following verse(in quotes):

Sir,Asthavakra,Guru of Sri Rama has also written some verses in Vedas.So Vedas goes back to Ramayana era.
So we could safely say they are atleast 5000 years old.

Sorry for the off-topic coment.But hope to get a reply.

Non indian Name of author would have been sufficient to dismiss the article. Let's face the fact, its their religious duty to find nothing good in India and undermine all of India civilisational achievements & glory. Mention of Vedic deities in Hittite Mittani treaty is proof of Westward flow of Indian cultural influence not other way around as normally concluded by the resident Non indians dreaming 24-7 for ME sand.

I must say that I find that questions about the 'origin' of a language dont make much sense. Arent we imposing an abstraction from biology on human communication and cultural memory preservation tools and devices ?

I dont think we even know how to define language properly in a context outside linguistic science.

The whole purpose of creating a mythical "Proto Indo European" (PIE) language which is allegedly the mother of all languages is to undermine the primacy of Sanskrit as the mother language. There does not exist even ONE bit of archaeological evidence or literary heritage to suggest the existence of PIE.

Now the artificial and politically revisionist hypothesis of PIE is being used to foist upon an unsuspecting world that that Sanskrit (and all the literature that exists) does not belong to the world. Why are these people so keen to usurp Indian heritage ? And why are they manufacturing so many lies and creating dubious circular links to uphold this damnable pack of lies.

I do hope that Indian social scientists, linguists, genetic scientists, archaeologists and scientists ruthlessly expose the whole false edifice that has been constructed to deny Indians (and the world) from acknowledging the real knowledge traditions of India and the oriental world.

We must also train a spotlight on these usurpers and ask some deep questions: Why do they do this? Why are they so insecure? And why do they work so hard to denigrate and deny the existence of an ancient Indian civilization?

Is it some sort of a late rearguard action by Neanderthal survivors in the evolution of Consciousness?

Whether Sangskrit (to use the Bengali version of the word) arrived in what is now known as India fully formed and prospered with later accretions and borrowings from indigenous languages is of course something that is hidden in the mists of time. But what Shoaib Daniyal succeeds in demonstrating is that the origin of the language lies elsewhere other than in India. The fact that most of the present day population of N India is derived from groups of people who arrived via Afghanistan in and brought their language(s) to India is pretty well accepted by all and sundry. Evidence of that link is still discernible in places like Iran. One of the appellations that the last Shah of Iran bestowed on himself is Aryamehr meaning the light (sun?) of the Aryans. Arya does not need an explanation but mehr is the equivalent of what in is Bengali written as 'mihir' meaning the sun or light. The origin, development and spread of a language is of great academic interest and can rightly be considered to fall within the ambit of an academic conference. But to use such an occasion to promote sectarian nationalistic feelings is not only infra dig but also fraught with danger.

An enlightening article and a good reply to Mr Shoaib...

How would you explain Sanskrit being recorded in Syria then??

Hi,
We found a few fallacies and marked the same against this article on the Tarkic Platform. Can we add the link to this blog as a Counter-view on the Annotated(Tarkic) link given below:
Looking forward your response.


About Tarkic: Tarkic meaning logical in sanskrit was developed to bring tools of logic to the web. Using Tarkic users can identify fallacies in a web document, annotate over information, provide counter-views and share their analysis to the broader web community.
Website: https://tarkic.com

I mean't fallacies in the scroll article.