Continuing his series on Dharma, Artha, Kāma, Mokṣa , Bibek Debroy  talks to us about the importance of silence and inner contemplation for the realisation not just of wisdom, but of the atman itself. Is language all it's made out to be? Do we realise the importance of listening, not just to others but also to our inner self? How can we obtain mukti? Read on, for some thought provoking ideas. 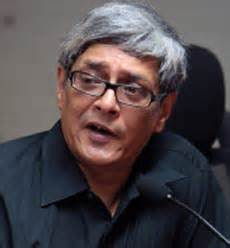 Let’s continue from where we left off last month.  As a core principle of Hinduism, we have the existence of the atman.  It is reasonably easy for most people to accept that the आत्मन् is distinct from the physical body.  By that, I mean the acceptance of the principle, the concept.  It is a different matter that, in practice, most of us may find it difficult to disentangle the two.
The physical body means the five organs of sense and the five organs of action.  The physical is easier.  The non-physical is more difficult to digest.  There are layers in the non-physical.  In the last piece, I quoted Adi Shankaracharya’s निर्वाणषट्कम् and मनोबुद्धयहंकार चित्तानि नाहं.  अहंकार is pride, ego, arrogance, self-conceit.  अहंकार is actuallyअहम्-कार.  It is that which leads to the sense of अहम्.
Think of the word “I” in the English language.  Why is it in capital letters?  Thankfully, in Sanskrit and in Indian languages that I know of, there is no “I” in capital letters.  That ought to make it easier, though it probably doesn’t.  All the time, one runs into people who say, “I will do this.  I will do that.  I will change the world.”  With age, one ought to mellow down and realize that the world is impervious to change in that sense.  We can’t change the world.  We are insignificant.  At best, we can change ourselves.  There is a shloka in the Bhagavad Gita, 5.8.  नैव किञ्चित् करोमीति युक्तो मन्येत तत्त्ववित्.  I am glossing over the युक्तो तत्त्ववित् part a bit, because I don’t want to complicate matters right now.  For present purposes, the relevant bit is नैव किञ्चित् करोमीति मन्येत.  The one who knows about the truth thinks, “I am doing nothing.”
If अहंकार is difficult to transcend, बुद्धि and मन are more so. बुद्धि is reasoning, intelligence, the intellectual faculties and मन is the mind. Without getting into taxonomy and semantics too much, चित्त is a consciousness that is different from both mind and intelligence.  What’s the point? The point is that just as the physical bits are subservient to the senses, the so-called mental bits of मनोबुद्धयहंकार चित्तानि are also subservient to the senses.  To use another term, these are discernible or manifest, व्यक्त.  However, discernible by what?  By the senses.

The atman is none of these. It is अव्यक्त.  It is indiscernible.  It is not manifest.  That doesn’t mean it can’t be realized.  But it cannot be realized by the senses.  The senses are about our relationships with the external world.  The atman is about what is inside us.  By seeking to measure it with norms that are relevant for the external world, we are asking the wrong question.  It is like a door in a house.  That door can be used to step outside.  But it can also be used to step inside.  If your minds are fixated on stepping outside, we can’t be expected to know what is inside the house.
The word योग is much-maligned and abused through over-use.  Of course, it has multiple meanings and we will revisit it at some point. Chapter 9 of the Bhagavad Gita talks about raja yoga, based on Patanjali’s ashtanga yoga.  It’s called ashtanga yoga because it has eight parts  -यम (restraint), नियम (control, the following of rules), आसन (posture), प्राणायाम (control of the breath), प्रत्याहार (withdrawal), धारणा(concentration on an object), ध्यान (meditation) and समाधि (trance).  If one leaves out the higher levels, this is about reflection, meditation, spending time with one’s own self and physical and mental discipline that helps one to do this.

Every human advance has brought benefits, but it has also brought costs.  One of the great advances is the discovery (or is the right word invention?) of language.  But let’s not pretend that it has not had its costs.  We are so busy talking all the time that we don’t listen.  This isn’t just about listening to others.  It is also about listening to one’s own self, about contemplation on one’s inner self, without necessarily implying high-flying concepts of meditation.  Let’s just cut ourselves off from the external word and think about who we are.  I like the word मुनि.  It means sage or holy man (especially one who has taken a vow of silence) and comes from मन् the etymological root of मनन, the act of thinking or meditation.  What is interesting is that मुनि lead to the word मौन, silence. Silence is also correlated with wisdom.
As a logical principle, we know there are phenomena beyond the immediate senses.  Infra-red and ultra-violet light is a case in point. These exist despite our senses being unable to capture them.  As another logical principle, we also know that many animals have senses superior to human beings.  When a sense is not used, it tends to atrophy.  Had language not existed, our other senses might have been more acute.  When one sense organ is completely dysfunctional, the other senses tend to compensate.  This leads me to the following proposition.  Trying to measure the atman through the senses, or through apparatus, is a pointless exercise.  I need to spend time in inner contemplation.  There are people who have done that and have said that they have comprehended something beyond the physical body and the मनोबुद्धयहंकार चित्तानि.  I see no reason to dismiss all of them as frauds, because all of them certainly do not have anything to gain from that assertion.  If I am not prepared to spend the time myself, who am I to disbelieve?  If I am interested, let me spend the time.
Let me leave you with the first line of the Ashtavakra Gita, from a question being asked by King Janaka to the sage Ashtavakra.  कथं ज्ञानम् अवाप्नोति कथं मुक्ति: भविष्यति  “How is knowledge obtained?  How is freedom obtained?”  As I said earlier, I am not talking about other religions. But this is Hinduism’s core question.  And we will continue to probe the answers.
Posted by Rohini Bakshi at 10:55 pm

You are greater than any saint sir.

In the blog I find Hindi words. Can you please translate them in English too (for non Hindi speaking audience). I really would like to read this blog and understand it completely.

A gem of an article. Prof. Debroy is truly a Renaissance man.

U r a gem...ur words are seems speaking from a saint mouth sir......plz focus on any meditation way as well ...I m si confused about to acxept any method.......thanks a lot for this article

Admiring the time and energy you put into your blog and detailed information you
present. It's nice to come across a blog every once in a while that isn't the same out of date rehashed information.
Great read! I've bookmarked your site and I'm including
your RSS feeds to my Google account.

my webpage - laptops under 300 dollars

First off I want to say wonderful blog! I had a quick question that I'd like to ask if you do not mind. I was interested to know how you center yourself and clear your thoughts before writing. I've had trouble clearing my thoughts in getting my ideas out.

I truly do take pleasure in writing however it just seems like the first 10 to 15 minutes are generally lost simply just trying to figure out how to begin.
Any ideas or hints? Many thanks!

Quality content is the key to interest the people to pay a quick visit the
site, that's what this web page is providing.