Bandhu in the Upanishads: Background note for Twitter session 25/03/2013

When we hear the word, upaniṣad our most immediate response is "ātman=brahman" because that is indeed the central and most powerful philosophical idea of the upaniṣad. This idea is so overpowering that it eclipses everything else recorded in the  upaniṣads. The  upaniṣads are in fact complex, varied texts that address even the everyday concerns of human beings, like how to attract the affection of a woman you like and observations about the cosmic fire within us which we can hear if we press our ears closes with our fingers. (Try it!)

They were composed at a time of tremendous social, economic and religious upheaval, and they document the transition of Hinduism from the ritualism of the early Vedic era to the emergence of central religious concepts that define the religion as we know it today. Ideas such as the law of karma regulating the rebirth process, and the techniques of liberation from the cycle of rebirth. Generally, the early Vedic corpus comes to be called karmakāṇḍa (ritual) and the upaniṣads are called the jñānakāṇḍa (salvific knowledge).

The earliest upaniṣads are generally regarded as pre-buddhistic and are written in prose. Later texts are written in verse and display distinct theistic tendencies. But the overwhelming theme is the rejection of external ritual as a path to salvation. Composed over a period of nearly 600 years, these texts are considered the most fundamental religious texts by almost all Hindus. Like the samhitas and the brāhmaṇas before them, the  upaniṣads belong to specific Vedic śākhās (lit. branches) like so*: 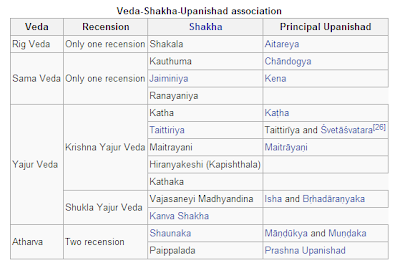 In today's Twitter session we will be looking at a text that exemplifies a key upaniṣadic concept - that of 'bandhu' or equivalence. How do we get 'from me and you' to a single universal substratum? Let's find out in #SanksritAppreciationHour. Join me at 3pm GMT today on Twitter.

* Table is taken from the Wikipedia page on Upanishads.
Posted by Rohini Bakshi at 2:35 am

I disagree with the assessment that Upanishads mark a transition stage from ritualism to Philosophy.

The Whole Vedic corpus-Samhitas, Brahmans, Aranyakas and Upanishads can be taken as one phase. The Samhitas representing Spiritual Realizations of the Rishis, Brahmanas the ritualistic aspect (Karma Khanda) needed to achieve Chitta Shuddhi and finally the Upanishads being teachings of Guru to Shishya who has achieved Chitta Shuddhi about the Highest Truth. So, it is not a rejection of one and transition into another. That is the view of modern scholarship but rejected by the tradition.

You may like to read this old article of mine "Evolution of Hinduism" (http://www.merinews.com/article/spiritual-evolution-of-hinduism/15797852.shtml). It is NOT an in-depth article, and there are certain portions which Now, i feel i should re-consider, but broadly I still stand by those analysis.

Upa = near or close; Nishad = Approach or witness. The seers and rishis having undergone the seven chakras and the culmination of the journey at the Sahasrara Chakra found the "veil of Maya" part, revealing Truth. To disseminate the same, they took it upon themselves to narrate the Upanishads- a symbolism of Truth to lesser folk for their spiritual upliftment.

My partner and I absolutely love your blog
and find a lot of your post's to be exactly I'm looking for.

Does one offer guest writers to write content to suit
your needs? I wouldn't mind writing a post or elaborating on a number of the subjects you write about here. Again, awesome website!

There is certainly a great deal to learn about this
subject. I like all the points you've made.

I think that is one of the such a lot vital info for
me. And i'm glad studying your article. However want to observation on few normal issues, The website style is ideal, the articles is in reality excellent : D. Excellent task, cheers

Feel free to surf to my web site - 腕時計コピー

Link exchange is nothing else however it is simply placing the other person's weblog link on your page at appropriate place and other person will also do similar in favor of you.

Hi would you mind sharing which blog platform you're working with? I'm planning to start my own blog in the
near future but I'm having a tough time selecting between BlogEngine/Wordpress/B2evolution and Drupal. The reason I ask is because your design and style seems different then most blogs and I'm looking for something completely
unique. P.S My apologies for being off-topic but
I had to ask!

I'm curious to find out what blog platform you happen to be utilizing? I'm experiencing some minor security problems with my latest blog and
I would like to find something more safe. Do you have any recommendations?

Thanks a bunch for sharing this with all of us you actually understand what you're talking about! Bookmarked. Kindly additionally consult with my web site =). We will have a hyperlink exchange agreement among us

I don't even know how I ended up here, but I thought this post was good. I don't know who you are
but certainly you're going to a famous blogger if you aren't already ;) Cheers!

Could you please give me references to where I can find "bandhu" in the Upanishads?
Thank you very much.

Could you please give me references to where I can find "bandhu" in the Upanishads?
Thank you very much.