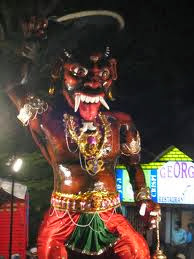 What’s the equivalent of demon?  Several words spring to mind – asura, daitya, danava, rakshasa, pishacha.  In our texts, these words are often used synonymously.  They shouldn’t be.  The meanings are quite different.  The sage Kashyapa was married to several of Daksha’s daughters.  Aditi, Diti, Danu were three of these.  Kashyapa and Aditi had the Adityas as their children, Kashyapa and Diti had the daityas, while Kashyapa and Danu had the danavas. Daityas and danavas on one side, and adityas as gods on the other, were cousins.  The gods were younger cousins. Asuras were antithesis of the gods, defined as suras.  Rakshasas represented almost a different kind of civilization and pishachas were flesh-eaters.  But forget that taxonomy about demons.  As I said, those terms were often used synonymously.

“When it is time to sorrow, don’t grieve.  When it is time to be delighted, don’t be happy.  Forget the past and the future.  Be concerned only with the present.”  Who do you think said this?  You will probably think it is a subhashitam and indeed, there is a famous subhashitam that sounds similar.  If I add a few more quotes from the same passage, they will vaguely remind you of the Bhagavad Gita.  The quote I gave you is from the Mahabharata, from the Shanti Parva, from the Moksha Dharma section of the Shanti Parva.  Let me use the word asura as a general synonym for demons.  Not all asuras were bad.  As I told you, towards the end of the last blog, asuras like Bali, Namuchi and Prahlada/Prahrada were dislodged from their prosperity.  Indra went to visit them, expecting them to grieve and sorrow.  Instead, Indra found that they were cheerful enough and was puzzled.  The Mahabharata thus has extensive sections where these asuras teach Indra. 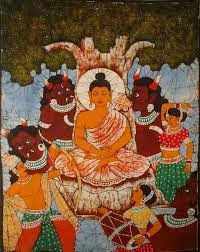 What is an asura?  In Buddhism, we have stories of Mara.  When Buddha meditated, Mara and/or his daughters came and tempted him.  When sages meditated, Indra would send celestial nymphs to dislodge them from their meditations.  Yogis and tantriks talk of demons that come and seduce them from their path to enlightenment.  I think these demons are no more than metaphors.  There was no asura whom the goddess killed.  We shouldn’t look at these asuras that way.  Just as the gods are inside us, the asuras are inside us too.  That’s what yoga, or any form of meditation, is trying to accomplish.  The intention is to get rid of attachment, get rid of vices like desire, anger, greed, delusion, ego and jealousy.  What will I obtain through the pursuit of dharma?  That’s probably the wrong question to ask.  Getting something comes later, losing something comes first.  I lose these vices, I lose these attachments, I lose these asuras.  What I then get is a proper sense of who I am.  That getting is hardly to be interpreted in the sense of material objects, riches, cars, passing in the exams, or whatever else it is that I am hankering for.  I have said it before, I dislike the word happiness.  I don’t know what it means.  Happiness is too often equated with these material objects. Once I have got what I am immediately hankering for, there is something else to be sought.  There is no end to that pursuit of happiness.  Instead, the pursuit of peace and tranquility is a more plausible one.

Our texts talk about the qualities or gunas of sattva, rajas and tamas.  Sattva is the quality of the good, rajas is the quality of passion and tamas is the quality of darkness.  The gods, not necessarily Indra, have qualities of sattva. The demons have the quality of tamas.  These qualities exist in us in different combinations.  For normal humans, it is rare to find someone completely devoid of tamas, certainly not of rajas.  With a complete absence of rajas, normal daily livelihood would be impossible.  But the point is simple enough, one of reducing tamas (and rajas) and increasing sattva.  I have now come to believe that there are some people who are good for us and some people who are bad for us.  In a man/woman kind of relationship, think of when you are in love.  Stating the obvious, that tends to bring out the best in us.  All too often, it does not last.

In a similar way, when our mind turns towards tamas, we seem to be attracted to such people and they are bad for us.  When our mind turns away from tamas, we seem to be attracted towards better people and they are good for us.  There are positive and negative feedback loops and synergies.  Have I said something very obvious?  I am not sure.  I am not talking about the very obvious recommendation of satsang, association with good and virtuous people.  I am talking about something that is a little more than that.  Obviously, association with good people tends to bring out the best in us, as long as it lasts for more than that temporary association.  I am making a slightly different point.  Our lives are rarely on a steady path.  There are ups and downs, there are cycles.  At some points, we are worse (in that sense of dharma) than at others.  Why does that happen?  In the broader scheme of things, that gets into questions of destiny.  What happens because of destiny?  What happens because of human action?  What happens because of pure chance, separate from preordained destiny and human action?  Not just Hinduism, but all kinds of sacred texts have grappled with this free will problem.  At some point, we need to revisit this again.  We need to talk about karma and what it means.


For the moment, let me make only one limited point about astrology.  In general, sticking to that framework of astrology and accepting it, I think we have the causation wrong.  I said, accepting that framework of the rashis/nakshatras for the moment.  It is not that those rashis/nakshatras influence our destiny and behavior.  There is a reason for being born, upliftment of the atman.  We accordingly choose a context for birth that is best suited for this and also choose an appropriate rashi/nakshtra.  It’s in that sense that the causation is the other way round.  I realize this is likely to start a debate.  So let me clarify.  This isn’t my view.  This is what I have gathered from reading some of our texts.  Incidentally, “Autobiography of a Yogi” also says something similar.
Posted by Rohini Bakshi at 3:20 am

Having read Bhagwadpuran and Shivpuran, the stories of avatars, boons, curses, wars etc all revolve around (interestingly) asuras. In many cases, they are not portrayed as bad but great kings, who ruled for long period and took good care of its subjects. However, as the time moves from satyug to kalyug, different gunas of asuras (howsoever small sin) become reason for their annihilation or mortal defeat. Few examples are below.

Ravana was killed for his lust for women and wealth of others, otherwise a great king and sage. MahaBali was a great king and great devotee of vishnu, yet vishnu took avatar to get his kingdom back, because he had disturbed "the balance of nature" by ruling heaven, ideally ruled by Indra. Hirankashyapu was killed because he despised vishnu.

The most interesting of all is Pashupati avatar of Shiva, which he takes to destroy tripura, a kingdom of three shiva bhakts. It was so good that vishnu and suras willfully destroyed their culture, which angered Shiva a lot. He asked all suras to take form of animals they fit in, and finally destroys tripura using pashupatiastra.

It was quite intriguing to learn so much about these great asuras, which teach us simple aspects of dharma in profound way.