In this blog post, Bibek Debroy touches upon the suffusion of Vedantic thought in Hindu texts. He also encourages us to shatter stereotypes. Supreme knowledge is not the preserve of the devas. Nor of men alone. He echoes Swami Vivekananda in indicating that atman has no gender, no imperfection. And that categories such as 'asura' need to be examined intelligently and in an informed manner. I couldn't agree with him more. My raison d'etre - be it this blog, or my Twitter presence, is to persuade you to 'Read the Scriptures Yourself'. Preferably in Sanskrit. And get a taste of the 'wealth' that Bibek has undoubtedly amassed.


In the last blog, I mentioned Bali, Namuchi and Prahlada/Prahrada.  Here is a quote. “Some speak of him as Agni and some speak of him as Prajapati.  Others say he is the seasons, the fortnights, the months, the days and the moments.  There are others who say he is the forenoon, the afternoon, or mid-day, or an instant.  Virtuous ones speak of him as one and many.  Know him as time, the one who has everything under his subjugation.”  Where do you think this quote is from?  As is implicitly clear, this quote is about the supreme force, the brahman, in this particular case, being equated with Brahma.  You might be tempted to think of one of the Vedas, or the Upanishads.  The quote is actually from the Mahabharata, Chapter 1546(217) of the Critical Edition. 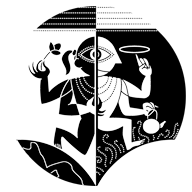 As I told you in the last blog, Bali had been dislodged from his prosperity and Indra had come to taunt him.  This bit, and there is much more, is what Bali taught Indra and this is nothing but Vedanta.  Here is something similar and this time, it is from Chapter 1544(215) and it is Prahrada speaking, under similar circumstances. “I know that everything has an end.  I have no sense of ownership.  I am without insolence.  I do not belong to this world.  I am free of all bonds.  I see that all beings have a beginning and an end and I am well. ..I do not see anyone who hates me.  Nor do I see anyone who is my own.”  Thus, asuras also possessed knowledge about the atman and the brahman.
In the Mahabharata, in the Moksha Dharma Parva, questions are raised about “sankhya” and “yoga”, 2 of the 6 darshanas (schools of philosophy) that existed.  Without getting into the nitty-gritty details, the point made there is that, unlike sankhya, yoga is a mode that is available to women.  Words of wisdom have come not only from asuras, but also women.  If I ask you about famous women sages, there are several you might mention, including Gargi, Maitreyi, Apala and Aditi.  I am not very sure you will mention Madalasa. You will find her story in the Markandeya Purana and I believe (I am not sure) a film was made about her in 1955.

Unlike the Ramayana and the Mahabharata, there are no critical or authenticated versions of the Puranas and you will find many versions floating around.  Manmatha Nath Dutta was one of the early translators (into English) of several sacred texts and he also translated the Markandeya Purana in 1896.  There is a remarkable passage about Madalasa singing to her infant son, a kind of lullaby.  For the record, I decided to write about Madalasa, because Dr Madhu Teckchandani* asked me about the original source of the lullaby. Let me thus acknowledge that debt to her.
The Manmatha Nath Dutta translation isn’t particularly good.  Nevertheless, this is what you will find in Chapter 25 of his translation. “Thou art pure, O child, and without a name. It is by imagination that a name has been given to thee. This thy body, composed of five elements, is not thine. Nor dost thou belong to it. Wherefore dost thou weep? Or perhaps thou dost not weep - This is a self-produced sound coming out through the king's son. Various qualities, good or bad, relating to the elements, have been attributed to thy organs. In this world, beings, extremely feeble, acquire their growth by help of the elements, and taking meats and drinks; but thou hast no growth or decay. This body is a covering and it will be shattered and still thou will live on; therefore thou shouldst not yield to stupefaction in this body. It is by virtue of good and bad acts engendered by stupefaction, caused by pride and other passions that this covering of a body has been fixed on thee.”   Despite the translation not being that good, this is Vedanta again.

Madalasa finds a mention in Swami Vivekananda’s work, for example, in the lecture on Vedanta and its application to everyday life. “You have read in one of the Puranas that beautiful story of queen Madâlasâ, how as soon as she has a child she puts her baby with her own hands in the cradle, and how as the cradle rocks to and fro, she begins to sing, "Thou art the Pure One the Stainless, the Sinless, the Mighty One, the Great One." Ay, there is much in that.” Madalasa taught so much of Vedanta to her first three sons that they renounced everything.  She instructed the fourth son so that he might become a good king.

As I have said, there are different Sanskrit versions of the Markandeya Purana. So the text may differ a little, depending on which version you have picked up.  But in general, you will find something like this. शुद्धो $सि बुद्धो $सि निरंजनो$सि संसारमायापरिवर्जितो$सि । संसारस्वप्नं त्यज मोहनिद्रां. I promised that these random thoughts would be about Hinduism.  But de facto, I seem to have a bias towards Vedanta.  However, I don’t think it is a bias.  I think principles of Vedanta run deep, across all varieties of Hinduism.

Posted by Rohini Bakshi at 4:00 am