The word अवतार​ is translated as incarnation or descent.  It comes from the word अवतर​ण (अव√तॄ) meaning descent or coming down.  प्रलयपयोधिजले धृतवानसि वेदम्। विहितवहित्रचरित्रमखेदम्॥ केशव धृतमीनसशरीर जय जगदीश हरे॥ Many of us have heard this.  We need not necessarily know where it is from.  It is actually from Jayadeva’s “Gitagovindam” and is the first song (“gitam”), number 1.2 of the composition. The entire text is beautiful poetry and so is this song.  That’s the reason it is sung so often.  It is also known as the “Dashavatara strotam”, pinning down the number of “avatara”-s as ten.  These are Vishnu’s incarnations.

Except in some very rare cases, Shiva doesn’t have incarnations.  Most people tend to assume Vishnu has 10 incarnations.  That’s by and large true.  However, there are also occasions where 24 or 12 incarnations are mentioned.  Most people also tend to assume they know the names of the 10 incarnations and they are (1) Matysa; (2) Kurma; (3) Varaha; (4) Narasimha; (5) Vamana; (6) Parashurama; (7) Rama; (8) Krishna; (9) Buddha; and (10) Kalki, with Kalki to come in the future.  It isn’t always that consistent.  Sometimes, (9) Buddha is replaced by Balarama.  In Jayadeva, the list is (I am using the names used by Jayadeva and not replacing the words with more common synonyms) (1) Meena; (2) Kacchapa; (3) Sukara; (4) Narahari; (5) Vamana; (6) Bhrigupati; (7) Rama; (8) Haladhara; (9) Buddha; and (10) Kalki. Do I need to translate the shloka I quoted?  I guess not.  Except to say that “vahitra” means boat and “vihita” means arranged or contrived.  You arranged the Vedas through your character, which is like a boat in the waters of destruction, and held them up in the form of a fish.  That’s a loose kind of translation. 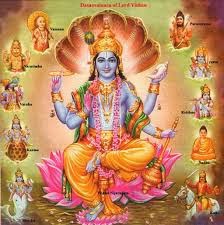 The following, from BG 4.7, is far more famous than Jayadeva and needs no translation whatsoever. यदा यद हि धर्मस्य ग्लानिर्भवति भारत​। अभ्युत्थानधर्मस्य तदात्मानं सृजाम्यहम्॥  The presumption is that when adharma raises its ugly head, Vishnu creates himself in the form of an incarnation, to destroy adharma and establish dharma.  The progressive transition of those 10 incarnations through an evolutionary process has often been commented upon, from a fish to a tortoise, boar, man-lion, dwarf and then man.  But think of the stories connected with those incarnations.  In what form where they adharma?  The fish saved Manu from a flood.  Unless that saving is interpreted as an instance of dharma, what was the adharma there?

The tortoise was relevant for the churning of the ocean.  The gods were related to the asuras, they had the same father, though different mothers.  Indeed, in distributing the amrita, a deception was practiced on the demons.  Unless one accepts the premise that all asuras are necessarily bad, there was no obvious act of adharma.  Hiranyaksha stole the earth and the boar killed him.  Ditto for Hiranyaksha’s elder brother, Hiranyakashipu, and the Narasimha incarnation.  Beyond oppressing the gods and sometimes dislodging them from heaven, it is difficult to make out a case for adharma.  Vamana and Bali are an even stronger example.  There is nothing to suggest that Bali was bad in any sense and his generosity was taken advantage of.  Sure, a single kshatriya, Kartavirya Arjuna, caused offence.  However, did that constitute enough adharma for Parashurama to exterminate kshatriyas 21 times?  An individual’s act of transgression led to extermination of the collective varna.  I can extend the argument for Rama, Krishna and Balarama/Buddha.  The case for establishing “dharma”, however defined, and destroying “adharma”, however defined, is not that strong.  At best, that BG 4.7 can be applied to Rama and Krishna. 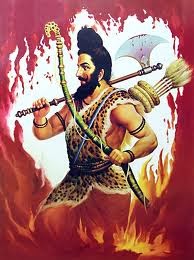 Notice that none of the incarnations, so far, have been brahmanas.  Parashurama may have been born as one.  But de facto, he was more like a kshatriya and there is a story about why he behaved that way, connected with his birth.  The incarnations have all involved violence, the way of a kshatriya, not that of a brahmana.  There is a shloka that was composed by Swami Vivekananda in honour of Shri Ramakrishna and it is as follows. स्थापकाय च धर्मस्य सर्वधर्मस्वरुपिणे। अवतारवरिष्ठाय रामाकृष्णाय ते नमः॥  It needs no translation. It is obvious enough.  This is also a different kind of establishment of dharma, and there is a reference to Shri Ramakrishna as an “avatara”.  This kind of establishment of “dharma” is the brahmana mode.  There were duties meant for brahmanas and there were duties meant for kshatriyas.  I am using the word duty, because this is not “dharma” in the sense of “moksha dharma” and emancipation.  It is more “dharma” in the sense of good conduct.

For example, brahmanas are meant to study, teach, perform sacrifices, officiate at the sacrifices, receive gifts and give gifts. That is good conduct for a brahmana.  For a kshatriya, included in that good conduct is chastisement and reward, chastisement of those who are wicked and reward of those who are good.  That’s more like rule of law.  BG 4.7 is about rule of law.  It is not about “dharma” in its broader sense of emancipation.  As I have said before, “dharma” in the sense of emancipation is about what is inside you.  Rule of law is about the external world.  It shouldn’t be surprising that none of the incarnations have been brahmanas.  What of Kalki, yet to come?  I am not sure how to describe Kalki.  He is a bit like Parashurama.  He will clearly be born in a brahmana household, so the Puranas tell us.  But riding on a white horse and with a blazing sword in his hand, his behaviour will be like that of a kshatriya.  If you read about what he will do, especially in the Kalki Purana, it is the spread of dharma through the sword.

There are nuances in dharma. And all I wanted to point out was that “dharma” in connection with the incarnations is a very specific kind of interpretation.
Posted by Rohini Bakshi at 4:00 am