On translation, and the case for learning Sanskrit.

To the followers of #SanskritAppreciationHour and the readers of my blog, this piece will come as no surprise. It's something I've expressed myself very often  about on Twitter. Yet, speaking to Advaita Kala made me realise the need to bring all my stray references together. The perils of translation across cultures are a matter of record. The title of Umberto Eco's scholarly and highly engaging book 'Mouse or Rat'1 says it all. A man called मूषक​ in a Sanskrit text (for whatever reason, maybe it's a Hitopadeśa like story!), would come across to the reader of the English translation very differently depending on whether he’s called Mr. Mouse or Mr. Rat. So the Italian saying 'traduttore, tradittore' (translator, traitor) is not without cause. Yet we’ve translated probably from the day language began to communicate with people outside our speech community. There have always been good/ bad/ reliable/ offensive/ terrible/ obnoxious/ excellent/ mediocre translations, and that description depends as much on the translator as it does on the reader who receives the translation.

I'm inclined to agree with Patrick Olivelle, who says every act of translation is an act of interpretation. And in my experience that interpretation depends on one’s world view (Weltanschauung) and the narrative one is comfortable with. Even on #SanskritAppreciationHour, not a session passes without some participant tweeting - 'I prefer this translation (of say, dharma) to the one you've chosen'. Now if you're reading a play or a poem, it doesn't matter that much if you translate काषाय​ as red or saffron or ochre. But when it comes to religious texts the story is completely different. If you don't learn Sanskrit, professors at my college will tell you that you have to read at least four English translation to get even close to the meaning of the Sanskrit. So if you’re interested in reading religious texts, the case for learning Sanskrit is a no-brainer really! 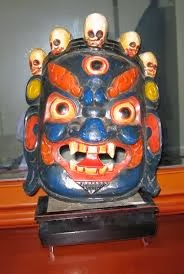 Sanskrit words have wide semantic fields, and can consequently be translated in many ways into English. Let's look at some examples. Last week I translated kālabhairavāṣṭakam on #SanskritAppreciationHour, and the word bhīma I took as formidable, because of my personal bhakti to Śiva. I could not conceive of him as being dreadful, terrible, and frightening, which were other options available to me. It took a participant sending me this picture to make me reconsider my translation.

Everyone does this whether they admit it to themselves or not. Let’s look at some other examples that have been in the news recently. Doniger translates kāmasakta (to describe Daśaratha in the Rāmāyaṇa) as ‘hopelessly attached to lust’ (verily, a sex addict). Were I to do so, I might have said something like ‘attached to sensual pleasures.’2 Sakta from √सञ्ज् meaning to cling, to adhere, to stick. From the same root we get सक्तु so called because of its stickiness. And kāma hardly needs translation, but still, for the record can be interpreted as desire, love, longing, sensuality, erotic or sexual love, wish, affection, pleasure and much more. So Doniger with her world view interprets it as lust, whereas another person with a different worldview would not.

Let’s come to another example. During their interview, Dinanath Batra told Advaita that गो means इन्द्रिय​ rather than cow3. He’s absolutely right. It does mean इन्द्रिय​ (organ). But it also means cow, which is why we understand Gopāla to mean protector of cows, and Govinda to mean the one who finds the cows, but also the one who pleases the senses. Clearly गो  doesn’t just mean इन्द्रिय​.4 A classic polyvalent Sanskrit word, गो can mean cow, light, a region of the sky, number nine, mother, water, earth, speech, organ and much more. A lot depends also on context. If I saw गो in a yoga text talking about karmendriyāṇi I would know that it means an organ of action. But if I saw it in a śrauta or gṛhya text, it would mean cow.

Translation is tricky business. Translators are often regarded with scepticism and distrust. And their antecedents alone are often cause to reject their work outright. I’m not here to preach, but seing as it's my blog, I will share my personal view! So long as I know where the translator is coming from, and what filters he/she is likely to apply to the text, I factor that in, and read accordingly. For instance, D.N Jha and Jaidayal Dalmia (Gita Press Gorakhpur)5 stand at opposite poles on the issue of animal sacrifice in Vedic texts. In this case it is not just translation of individual words like go-ghna, but also selective quoting from ancient scriptures to build their respective and mutually exclusive narratives. I would reject neither, read both, and make my way to the original texts to check out the veracity of the references, and assess their translations based on my knowledge of Sanskrit. But to empower yourself this way, it is essential that you learn Sanskrit. Otherwise you'll always be at the mercy of a translator/traitor!

Posted by Rohini Bakshi at 2:18 am

This is terrific. The appeal to context is one that should be made over and over again. In addition to context (the understanding of a word in the historical and literary setting is deployed in), a translator must keep in mind communicatability. A translator must translate a word (sentence, phrase, fragment, etc.) in a manner that resonates with her audience.

To keep with the example you used, I do not know the exact context or situation in which Dasharatha is described as kāmasakta in the Ramayana. Between "hopelessly attached to lust" (Doniger) and "attached to sensual pleasures"(Bakshi), Doniger's translation conveys a very vivid picture of Dasharatha. I can think of people in the world whom I would call "hopelessly attached to lust," but I have never heard anyone described as "attached to sensual pleasures." (These people will remain nameless.) The Sanskritist may understand Bakshi's phrase, but the general reader may gloss over it and it's vague/technical implications.

Again, I do not know whether Doniger's is the picture the original context presented, but it succeeds as a translation because it attempts to translate concepts rather than words-for-words. Still, there is a very real possibility that Valmiki, the author of the Ramayana, intended to describe something more than just sex that Dasaratha was addicted to. For kāmasakta I would probably use the word "aesthete." Hopefully that would successfully make any reader pause and think about what Dasharatha is.

Some time around the 4th century BCE, a form of language emerged in Buddhist circles that modern scholars refer to as Buddhist-Hybrid-Sanskrit. It mostly uses Sanskrit grammar and vocabulary, but often in very specific ways that would be inaccessible to a non-Buddhist. An unfortunate development of modern scholarship is the translation of Buddhist texts in a manner that is quite scholarly and contextual, but almost impossible for the non-specialist to understand. The running joke is that these translations are not written in English, but are in Buddhist-Hybrid-English. We must make sure that our translations are both grounded in the past and aware of the present.

Keep up the good work Rohini!

Thanks Eric. Of course you're right. Aesthete makes much more sense than 'attached to sensual pleasure' I was merely trying to bring out the range of what kāma and sakta can mean.

And regarding where this reference is, is another issue. I have yet to find it. Banerjee's article says the same thing. It doesn't occur in the enraged words of Lakṣmaṇa when the banishment plot is first revealed in the rescension I possess. But a) I haven't read it cover to cover, and b)the rescension I read not having it, is not proof that it doesn't exist in another. The search continues! As does my effort to persuade people to learn #Sanskrit.

I actually just did a quick scan of Doniger's book (The Hindus) and couldn't find the exact phrase "hopelessly attached to lust’ (verily, a sex addict)" in the book. (Although in the court case brought against her, she is described by the offended parties as "a woman hungry for sex").

The quotation from the Ramayana that Doniger does give in her book has a reference. This is what she says—

Rama knows all too well what people said about Dasharatha; when Lakshmana learns that Rama has been exiled, he says, “The king is perverse, old, and addicted to sex, driven by lust (2.18.3).”

The version of the Ramayana she cites in the bibliography is "Ramayana of Valmiki. Baroda: Oriental Institute, 1960-75."

Her use of "lust" for kāma in some parts of the book is interesting. (And she explains this in the book.) She isn't translating kāma in this context as a part of the kāma-artha-dharma-moksha system, but rather as a a part of the kāma-krodha-lobha-moha system, in which case lust would make more sense, because these are passions. (Of course the two systems overlap and blend into each other.)

Sorry, just one more. I forgot to include the full quotation, in which Doniger's emphasis of the more sexual reading of kāma is somewhat more clear (although she keeps the Sanskrit word in brackets, so we can see what she is doing). Lakshmana is specifically accusing his father of valuing a pretty woman over dharma and artha. The full quote from The Hindus is as follows—


“Dasharatha’s son is certainly lustful” is a key phrase. Rama knows all too well what people said about Dasharatha; when Lakshmana learns that Rama has been exiled, he says, “The king is perverse, old, and addicted to sex, driven by lust (2.18.3).” Rama says as much himself: “He’s an old man, and with me away he is so besotted by Kaikeyi that he is completely in her power, and capable of doing anything. The king has lost his mind. I think sex (kama) is much more potent than either artha or dharma. For what man, even an idiot like father, would give up a good son like me for the sake of a pretty woman? (2.47.8-10).”

If you have access to the Sanskrit text quoted, it would be great if you could give us a snapshot or even reproduce it in the Devanagari. Thanks.

A well written article that brings out the importance of translation and the translator! The latter's personal filters, impact the former.

I have always loved Sanskrit for its structure and meaning. Not a single syllable,sound,vowel is wasted..every variation has a different meaning!

Please continue your good work in spreading this beautiful language!

Dear Anonymous, thank you for your comment. The key purpose of this article is to press the need to learn Sanskrit. Please help us spread the good word. Thanks.

RM fan army getting restive and upset about you. Brace yourself Rohiniji. I'm a well-wisher of yours.