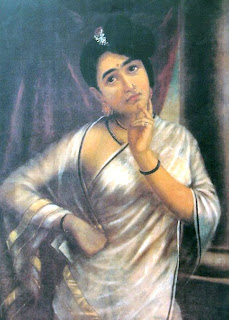 We finished our descriptions of Tall, Dark and Handsome (TDH) in last article. Now it’s time to take a look at fairer sex & beautiful minds. In this lengthy article, still not deep and in-complete, we are going to talk beauty of women with small deviation of description about high pedestal for women , then ,sringaar, description of entry of heroines and their eyes.

In this article we talk about Menakaa, Rambhaa, Kaalindi, Kaikeyi , Shoorpanakhaa and Sitaa. We also talk about beauty being described with words like “Thunder-strike” , “Kookoo-voice”, “eyes like Lotus”, “Big eyes”, “Eyes like infant Deer”. Read on.

The above shloka is just to show and remove any illusion of objectification of beauty. There are many shlokas in Ramayana & Mahaabhaarta too, but focus of article being on beauty I will reserve those for future references.

Let me quickly delve with topic/mention of sringaar. Girls take too much time in makeup & justifiably so. Our great greatest grandfather of Hindu race (Manu) wrote (in fact indirectly admonished male fraternity) very positively about this.

It says: Where women do makeup (are happy) everything in that family is good. Where women are devoid of this everything will be dull and uninteresting.

Now let’s focus on central point of our article: on the description of beauty in out scriptures and literature.  Let us start with entry of beautiful women on the panorama. Context:  After finishing his education in forest, when Raama is returning. He is being narrated about many Rishis. Here is the context of Rishi Vishwaamatira

It says: Son of Kushika, Vishwaamitra saw highly illustrious Menakaa. Her beauty was unparalleled. She was (looking like) thunder strike in the pond.

Now you know the original copy of many Hindi songs with reference to Bijli.

Let us see another entry:

Context:  Rishi Vishwaamitra is continuing his ‘tapasyaa’ and Rambhaa has been sent (by; who else then perennially insecure God Indra) to disturb him.
Valmiki Raamaayan, Baalkand, Sarg : 64, Shloka : 9

It says: (After hearing) Melodious speaking tune of Kookoo Son of Kushika, Rishi Vishwaamitra, with highly gladdened heart stared at her (Rambhaa). Here voice of Rambhaa has been compared as voice of Kookoo.

Context:  Here lineage of Lord Raama is being described and his ancestors are being mentioned. Amongst ancestors,  there happened a King named Asit  having 2 wives. One wife gave poisonous food to co-wife (Kaalindi) to kill the unborn son.  Here, eyes of Kaalindi have been described by both Valmiki and Rishi chyawan as Lotus-eyed.

It says:  Kaalindi , “ Eyes like lotus, desirous of good son , approached and addresses with reverence to that Rishi (Chyawan)

After Kaalindi, its turn of eyes of Kaikeyi

Context:  Kaikeyi has been instigated by Mantharaa & is now furious with the news of Lord Raam being anointed King of Ayodhyaa. Here size of eyes, big, has been treated as beautiful. In next shloka we will see more subtlety towards eyes. So Kaikeyi first;

It says: Thus instigated, she, with big eyes and mad with luxury and good fortune, went along with Mantharaa to the Palace of Anger (special designated hall to express anger in that) (see here, bad emotions are not allowed in day to day living place)

Small deviation: Big sized eyes have also been used by Lakshaman while dealing with Shoorpanakhaa, in Aranyaa kaand , Sarg 18,shloka 10. To avoid repetition, I’m not producing the shloka.We will see another reference to Shoorpanakhaa’s eye’s in next shloka.

Now, the turn of Sitaa- The goddess and the most dignified, composed and beautiful character of Raamaayana

Context: Raam, Sitaa and Laxman are living in forest. There comes Shoorpanakhaa with intent to marry Raama and in doing so she tries to kill Sitaa

There are infinite references to each and every body part in Sanskrit with most poetic, enigmatic, sensual yet dignified ways. We have not even scratched the surface. It is rich and delighting to an extent of making you a poet. So be forewarned, you can very well become a poet if you read Sanskrit with Rasaa.

* I may or may not agree with the opinion of guest writers, but I respect their right to be heard.
Tweet
Posted by Rohini Bakshi at 1:29 am