Please welcome guest* writer Mam dhata, who has kindly encapuslated the discussion on Twitter raised by Bibek Debroy's Dharma, Artha, Kama Moksha VIII. A Gemini, Mam dhata holds a degree in Philosophy and is deeply interested in comparative religion. He admires Zoroastrianism, Hinduism, and Buddhism, and has studied Christianity and Islam. Well versed in Hindu scriptures, Mam dhata is an enthusiastic participant and support of the 'Revive Sanskrit' programme on Twitter. You can learn more about his views by following his Twitter handle @Mamdhata

SRI RAMA DHARMA SANKATAM – OR THE  ETHICIAL DILEMMA OF RAMA 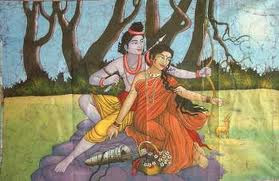 the uncle , on dharma.   Question on dharma related to what should one do when there is a conflict in dharma.  The enquirer  posed the question:  would Raja Rama have upheld both Dharma - as a Raja & as a pati (husband) had be abdicated as an Raja and then accompanied Sita as a husband.  In his stead, the greater objective of welfare of subjects could have been achieved by Raja Rama by handing over reigns to his brothers.  Thus both the dharma could have been achieved without conflict.

2.         What a delight it is to attempt an answer to this question by a darling 8 year old and how wise beyond his years is he.  This reminds me of Yama's joy at Nachiketas questions to which Yama himself exclaimed:

Such is the rarity of persons who query on Dharma as even Yama himself experiences even though all humans are his guests.

3.         Among the arguments that was put forth was Rama could have abdicated.  Rama's Rajadharma was to ensure the welfare of his subjects either through his own direct rule or through that of his brothers.  An example was cited of Bharata ruling on Rama's behalf during his 14 years of  exile. Bharata.  This is an excellent argument too.

4.         Hinduism has always welcome the exploration into nuances of Dharma and explored alternatives.  Duryodhana while lying with his legs shattered had rebuked Yudhisthira saying that during his reign people were happy & contended and that in annexing Yudhisthira's kingdom he was only pursuing Rajadharma in that he was not allowing his enemies to grow.  Duryodhana's arguments are put forth with greater vigor in Bhasa's play Urubhangam. 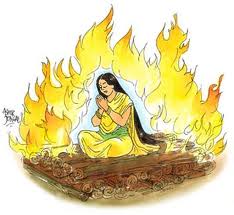 5.         Let us now come to the question proper:  Here there is an ethical dilemma – which is – what   action when pursued would result in most appropriate dharma.  Dharma has been defined as Dharayati iti dharmah i.e., that which supports is Dharma.   Actions, attitudes and modes of life which support either the station/stage in life or society as a whole.  Rama's banishment of Sita was a result of fear by the subjects -  as expressed through the mouth of a Rajaka – a washerman.  The subjects feared that since Rama had accepted his wife who had stayed in someone else's place – they too would be forced to accept their wives after having stayed in in a non-marital home or parents house.  The unstated fear was that marital fidelity which is the basis for sound relationship between husband and wife and society as whole would now be compromised.  The subjects feared that  this would give fillip to infidelity and that nothing could be done if the spouses chose to return after philandering.  Although these thoughts are not specifically expressed in Uttara Ramayana, Rama correctly deducted from the absolute silence of witness in the drama in public place and that none of the public had sided with the 'straying' wife of a washer-woman that society as a whole did endorse the Rajaka's arguments. In Malayalam there is a saying that if 4 people speak ill about a person, then that person should relocate from the village. Hence, as a responsive monarch to the sentiments of the subjects, he banished Sita.

6.         However, there is an unanimity in dharma shastras that wife and other dependents may not be abandoned.  During the the sapta-padi (saat phera in Hindi) a groom promises will cherish and protect his wife.  This he does in front of a witness – Agni – which is every where in the form of sun, the stars and the moon and the fire.  Hence Agni is a eternal witness to this marital promise. The question then arises did Rama break this promise made in front of Agni, the eternal witness to cherish his (pregnant) and (innocent) wife. (Rohini ma'm:  if I remember correctly, Sita does ask Lakshmana as to why he didn't leave her with his father if he suspected her).

7.         The situation before Rama was complex – Raja dharma on one side and pati dharma on other hand.  Rama does not suspect his wife of infidelity but his subjects do.  In fact his subjects fear that Rama's action would become the norm and that they would be forced to put-up with philandering spouses.  If he does nothing then the Rama's actions would become the norm – Yatha raja thatha praja; Raja Rama being the trend setter would usher moral decline in the society. 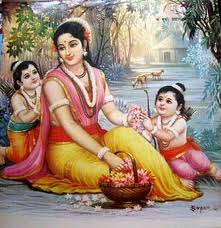 and send her back to her family – this would mean giving credence to society's rumors indeed she had been unfaithful.  (2) Rama could keep Sita with her and the subjects/judges would point him as their matrka purusha model to be emulated and started giving judgments thereby inaugurating a decline in dharma. (3)  An innovative solution wherein he banishes her – does not send her to her father thereby confirming rumors nor he does he remarry thereby rebuking the subjects by indirectly saying that I have no reason to suspect her fidelity in any way.  It is for you that I have forsaken my wife.

9.         Rama's course of action now seems obvious.  However, herein lies the twist in the tale as pointed out by our young, perspicacious querant.  Could not Rama have gone with Sita to the forests and abdicated his kingship.  Rama's duty of praja palanam could have been done his brothers such as Bharata or Lakshmana Shatrughna who were equally competent and solicitous of welfare of the subjects.  Would his brothers Bharata & Shatrughna have accepted this situation?  Bharata declined to accept this kingship when offered to him and said only Rama is eligible for rulership and that during 14 years he would function as his regent only.  Ayodhya's subjects wanted to accompany him during his first banishment.  It is moot whether they would have accepted Rama going to forests a second time.  In an era when kings had untrammeled powers to do as they liked, Rama acts more like a democrat and listens to his subjects.  Rama also acts like a matrika purusha (a model man) and doesn't break dharma's codes and remarries.

10.       Even if Rama could have done these  instead of being a matrika purusha (a model man), the world would have castigated him for being besotted with sensual pleasures.   A reference may be made here to King Edward the VIII who abdicated his throne to marry a divorcee Wallis Simpson.  His refusal to remarry on being advised by sages such as Vashishtha during Ashvamedha Yaga or upon Sita going back to mother earth send strong signal for monogamous marriages  and for eka patni/pati vrtam. (one spouse vratam).  This strong moral impact that influenced Indian culture and society  to a very great extent.

11.       Rama  Rajyam concept included not only the concept that the king and the subjects were in mutual interdependence and should be responsive to each but it also included as to how a man should conduct as a father, son, husband, wife, brother and a king.  This Rama could shown  had be abdicated his throne.

*I may or may not agree with the views of guest writers but I respect their right to be heard.

Posted by Rohini Bakshi at 1:52 am