What exactly is a shiva-linga?

This post is being reproduced here as desired by its author, Mam dhata, who is a guest writer* on this blog. He is also a key supporter of the "Revive Sanskrit" initiative on Twitter - which much like the internet has no 'owner' but is an interconnected network of enthusiasts, all doing their utmost for Sanskrit! To share more of his views, you can follow him on Twitter @Mamdhata 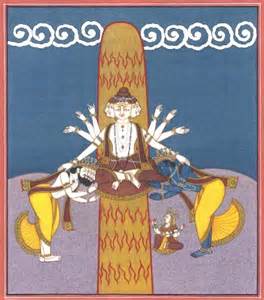 Last Shiva ratri a few secular Illuminati commented on Shiva linga which were quite lewd, derogatory and far removed from understanding of Shiva and Shiva linga. This erroneous understanding that Shiva linga = penis propagated by cow-caste-curry Westerners is being mindlessly repeated by English-educated Indians who have not taken the trouble of knowing this matter.

Let us first understand what linga means? Monier-Williams dictionary defines thus
http://www.sanskrit-lexicon.uni-koeln.de/scans/MWScan/index.php?sfx=pdf. A linga is a mark, a symbol, an indication. Qualifiers such as pum or stri modify the word to indicate whether male or female.

What does Shiva in the form of linga signify? It is certainly not organ of generation as some ignorant say. Shiva is called स्मर हर = destroyer of kama; He is also called in ऊर्ध्व रेतस् = one whose svadhistana chakra is opened but has sublimated all desires. 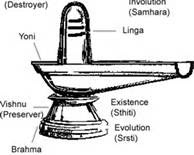 i.e., Linga is kama dahana – that which burns up desires include desire for sex. A Shiva Linga consists of three parts, the lowest of which is called the 'Brahma-Pitha,' the middle one, the 'Vishnu-Pitha' and the uppermost one, the 'Shiva-Pitha.' Thus is is very clear that Shiva linga doesn't represent any form of symbol of sex.

Meaning:
who whose head is adorned with moon, destroyer of Kama, bearer of Ganga
one who was snakes for ear ornaments and fire for (third) eye
one who wears elephant skin, beautifully attired, one who is the essence of 3 worlds
for the sake of Moksa (liberation), please make my consciousness firm
What other effort is of any use (to man)

Sankaracharya prays to Smarahara (destroyer of kama) with these words मोक्षार्थं कुरु चित्त वृत्तिम् अचलम् i.e., make my consciousness firm without any mental modifications for the sake of moksha. As Paramayogi (Supreme Yogi) it is fitting that Shiva is prayed to thus. Patanjali defines Yoga योग चित्तावृत्ति निरोधः i.e., yoga is stopping of mental modifications.

Shiva is also called vyomakesha व्योमकेशः i.e., one whose hair alone form the outspace. This hair is illumined with moon – चन्द्रोभासित शेखरे and with (आकश) गंगाधरे - & with akasha Ganga or the milky way.

Shiva signifies the formless Brahman - rooted in this world – but also beyond it as is said in Purusha Suktam अत्यतिष्टद् दशांगुलम् = extending 10 fingers beyond the entire universe. It is this immanence that is the subject of Sri Rudram in Yajur Veda where Shiva is identified with everything in this known world. Hence the most apt symbol for Sthanu i.e., pillar (i.e., support of this Universe). The pillar itself indicating that He alone is the basis for all creation and that He is formless. Linga is a very apt symbol of this.

*I may or may not agree with the view of guest writers but I respect their right to be heard.

Posted by Rohini Bakshi at 8:59 am