How best is dharma pursued - the new age way or the traditional? What helps us centre ourselves? Stop being scattered?Is it a personal god? A temple? A physio-neurological practice? Is there one right way? Bibek Debroy nudges us to examine our own beliefs and perhaps our conviction that 'our' belief is the best? Read on, leave a comment, share your views. Follow @bibekdebroy on Twitter to discuss this, to probe his mind further.


India has the second largest road network in the world, 0.66 km of roads per sq km of land.  All of us are always travelling along some road or the other.  I wonder what would happen if I asked you to name an Indian road.  I suspect someone would name Grand Trunk Road, someone else would mention one of the National Highways, someone else would mention one of the more recent Expressways.  Few would mention a village road, or a local road.  A road network is actually built from below.  It then aggregates upwards into those national highways and all-India level roads.  I think there is a parallel with the way we approach dharma.  एकम् सत् विप्राः बहुधा वदन्ति.  Most people have heard of this.  “Truth is one.  Wise people have spoken of it in different ways.”  Though this expression occurs in other Vedas too, the main source is the Rig Veda, 1.164.46.  I do have a minor problem with the way shlokas, or parts of shlokas, are plucked out and used, independent of the context.  For instance, this is a hymn to the Vishvadevas and the reference was to Indra, Mitra, Varuna and Agni, not quite the general sense in which we interpret the expression today.  But that’s a minor point.  In our pursuit of dharma, all of us walk our own individual roads.  But in the process of upward integration, we often aggregate into a personal god, typically Shiva or Vishnu.  I think a debate about a personal god is sterile and pointless.  Down the years, our betters have speculated about this.  A personal god isn’t necessary for pursuit of dharma, though it may help.  Read Swami Vivekananda.  However, if we make a fetish about a personal god, and confuse the means with the end, it isn’t sufficient either.
When I think of the map of India or Bharatavarsha, I am intrigued.  There are the mountains, up in the north, associated usually with Shiva.  There are the oceans, down there in the south, associated usually with Vishnu.  There is the vast expanse in the middle.  With some stretch of the imagination, they are identified with Brahma.  I said some stretch of the imagination, because only a slice of present-day India was known as Aryavarta or Brahmavarta.  There is a story about Brahma being cursed. Consequently, with the exception of Pushkara, there is no temple to Brahma, none that I know of.  In the flatlands of India, we seem to be cursed like Brahma.  Normally, we don’t think about 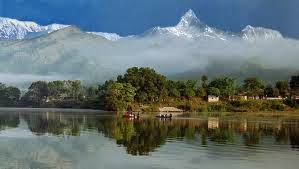 dharma.  There is an exception when we approach the mountains or the oceans.  Both of them have been around for thousands of years.  When we visit either, we are struck by the transient nature of human existence and our minds turn to religion.  Recently, I and my wife, and a friend and his wife, were on a visit to Nepal.  We went to a hill near Pokhara.  Phewa Lake, in Pokhara Valley, stretched out on one side.  But on the other side, in splendid isolation as the evening sun set, we could see Dhaulagiri, Annapurna-I and Manaslu.  For those who don’t know, these 3 figure in the list of the top ten highest mountains in the world.  My friend remarked, “How can your mind not turn to religion?”  Precisely.  Getting away from the flatlands helps.
I said I have an ambivalent feeling about a personal god.  (I don’t think I need one, though I can appreciate other people feeling the need for one.)  I have a similar ambivalent feeling about temples.  I rarely go to temples and whenever I have gone, the temple has left no mark.  There is only one exception, the Mahakaleshvara in Ujjain.  This is one of the 12 jyotirlingas and is the only one that faces the south.  We went there about 4 years ago.  For whatever reason, I have not been able to get the image of the linga out of my head.  It keeps recurring, often in my dreams, perhaps suggesting that I should go there again.  Anyway, Kathmandu is famous for the Pashupatinath temple.  I have been to Kathmandu at least 7 times earlier, but have never bothered to visit Pashupatinath.  This time, something odd happened. We had already made up our plans to go to Nepal.  A fortnight before we were due to leave, at a party, we ran into a gentleman, who though a professional, is part-time astrologer cum mystic, more the latter than the former.  He casually remarked, “You should go to Pashupatinath.”  We hadn’t told him we were going to Nepal, nor had he any means of knowing that.  It was a strange coincidence.  We did go to Pashupatinath.  Did it leave an imprint, the way Mahakaleshvara had?  No, it did not.


As far as I can make out, temples are relatively new.  I may be wrong.  But I don’t know of major temples that go back before the Gupta period.  The practice of dharma, such as yoga, requires the identification of an auspicious spot.  But that’s an individual identification, no different from having a prayer-room in one’s house.  A temple is more collective in nature. I am prepared to buy the argument that a designated place of worship creates positive energies.  If nothing else, it does it in a placebo kind of way.  For a prayer-room in one’s house, Swami Vivekananda talks about this in “Raja Yoga”.  It calms you down, you pacifies you and makes you ready.  Perhaps one can extrapolate this to collective energies and positive synergy in temples.  There is quite a bit of stuff floating around on ley lines and the earth’s energy, much of it drawing on books by Alfred Watkins (“Early British Trackways”, “The Old Straight Track”) and extending it in ways that Watkins would have found exceedingly strange. Somehow, I prefer old age DAKM, rather than all this new age stuff.
Posted by Rohini Bakshi at 2:34 am

There are other Brahma temples:
http://en.wikipedia.org/wiki/Brahma#Temples

There are other Brahma temples:
http://en.wikipedia.org/wiki/Brahma#Temples

Bhagwan has said that only after worshipping God in the conventional way like Temple worship etc does one meet a Satguru.

I am not knowledgeable enough to comment, but coming from the south Indian Vaishnava tradition just wanted to say for so many of us deities of our divyadesams are very close. We try to go to as many divyadesams as possible but still there is one particular deity who is very close. The Guru parampara, Azhwars have also played a role in this in going around and singing about the attributes of these deities. Archavataram, is given equal importance in the tradition.

Worshipping in temples takes you one step closer to understanding of God or the ultimate truth.

Temples are historic footprints of this very old civilization, It signifies great people and sometimes great events. I read Shiv Mahapuran and found that jyotirlingas were outcomes of great devotion of few ppl, rishis. Shaktipeeths signifies flesh wounds of mata Sati and a particular event which cause Tandav. We visit temples to celebrate greatness of these people and significance of these events (recall that only few days are considered very auspicious to visit temples, causing different level of crowds at diff times). Same goes for Buddha tree, which signifies greatness of a man enlightened under its shadows.

Temples are not abodes of Moksha; were never one and never will. It is a place to draw inspiration and solace though. It also strengthens our villages, socities, sustaining it in the long run. Moksha abodes are himalayas. Rivers. Jungles. Mountains. Thats were our Rishis lived.

Is there a paranormal significance of these temples? Are these bricks any different from those at our homes? Is the place any greater or has a special geographical greatness? Is the timber of Buddha tree any wiser than other trees? I believe they do but I dont know. Nothing is random here and most of these great things of nature are beyond my comprehension, an attempt to logical reasoning is much far.

Hello Rohini.. this is not really a comment on the post. I am an amateur hinduism researcher. I am trying to find some material on the web which might explain the spread of Hinduism across India in ancient times.. dates/ places . Are there any websites you can suggest?