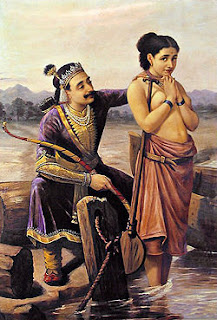 If you've read an abridged version of the Mahabharata (z.B C. Rajagopapachari's), you will be familiar with the story of Shanatanu (शांतनु) and Satyavati (सत्यवती). The king had gone hunting in the forest. As he "was wandering on the banks of the Yamuna, the air was suddenly filled with a fragrance so divinely sweet that the king sought for its cause, and he traced it to a maiden so lovely that she seemed a goddess."* She was Matsyagandha (smells-like-fish?), a fisher-woman, the daughter of the chief of fishermen. It did seem odd to me even as a child that a fisher-woman should have a sweet smell emanating from her, but it didn't arouse my curiosity too much because Rajaji had added an explanation. "A sage had conferred on  her the boon that a divine perfume should emanate from her and this was now pervading the whole forest."*
Decades later, reading D.P. Vora's informative book about The Evolution of Morals in the Epics, the mystery was finally solved. Matsyagandha used to ferry passengers from one shore of the Ganga to another in a boat. One day the great sage Parashara (पराशर) happened to be her passenger. He found her very attractive and "the desire to enjoy her arose in his mind."^ She refused him saying that there were people on the shore who could see them. So the sage created a mist around the boat. Not only that, he assured her that her 'maidenhood' would be restored after intercourse. He also offered her a boon. She said she wanted a sweet smell to emanate from her body And so it followed that they had sex on the boat.   Her name became Yojanagandha - because the musky scent from her body spread for 8-9 miles (yojana) around her. 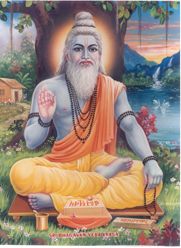 From their union, was born a son, who she abandoned on and island in the river Yamuna, because of which the child came to be known as Dvaipayna (द्वैपायन) from dvipa (द्वीप) meaning island. This child grew up to be the author of the Mahabharata.  To him is also ascribed the splitting up of the primordial single Veda into the four that we know. Hence Veda-Vyasa, vyasa meaning to disjoin, to separate, to divide. Hindu tradition also ascribes the authorship of the key Puranas to him.
Why and how Matsyagandha/Yojanagandha came to be called Satyavati, I still don't know. I do plan to read the Mahabharata to find out. Meanwhile if any of you  know the story, do tell me!! Apparently she is also a cursed apsara-turned-fish...
PS: I'm new at this, so please forgive the lack of diacritic marks (hence the supporting Devanagari for those who can read it). Also I need to work out how to apply superscripts. Till then the foot notes will not be precisely marked. If you know how it's done on blogger, I'd be grateful for the information.
For this story - I took material from C Rajagopalachari's Mahabharata, (Bharatiya Vidya Bhavan),  pg 22*; D.P Vora's "The Evolution of Morals in the Epics", 1959, Popular Book Depot, Bombay, pg 28^; Wikipedia pages on Veda Vyasa and Satyavati. The pictures are from Wikipedia and Google images.