Opposition to idol worship from within the Hindu tradition 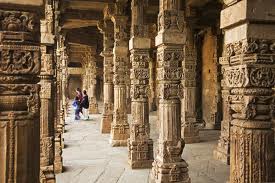 Come on, be honest! If you are a Hindu of any description, chances are the first thought that entered your head when you saw my mail was 'Muslim'. And why wouldn't it? Even without the intervention of the charming Murli Manohar Joshi, every school kid in India knows about Mahmud of Ghazni and the sacking of the Somnath temple. Go to the Qutab Minar and 'Raju' guide will inform you that the adjoining mosque 'Quwwat-ul-Islam', was built with material from nearly temples that were destroyed. He'll obligingly point out the carved temple bell on one of the slabs, and the Ganapati on one of the lowest stones, clearly an intended insult. [This picture of Quwwat-ul-Islam shows pillars from the said temple(s), just to give you an idea, in case you haven't been there.] We know who is against idol worship, right?? 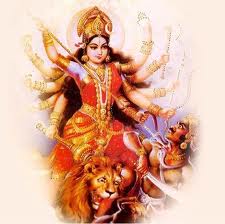 What they don't tell you at school; what they conveniently leave out of public discourse; what you are unlikely to find out unless you study Hinduism neutrally - is that, forget Islam, there are plenty of bona fide 'Hindu' schools of thought that oppose idol worship. Still others are silent on it, or just side step it. It  happened that the theistic traditions (Vaisnavism, Saivism, Shaktism) became extremely popular and idol worship, widespread, came to be considered the norm. The worship of images became the central liturgical programme for public religion in India during the medieval period.* (Perhaps even earlier, but that's another blog-post.) And opposition to it went hand in hand.
But first, the more widely known objectors. Thanks to the class IX and X curriculum, even those of us who didn't go on to study History or Religion in India have heard of  the Arya Samaj. Established in the 19th century by Swami Dayananda Saraswati its express purpose was to go back to the 'roots' of 'Hinduism'. For Dayananda that meant going back to the Vedic fire sacrifice and rejecting idol worship. Members of the Arya Samaj perform 'sandhya' संध्या (daily recitation of a set of mantras from the Vedas) and the 'agnihotra' (a Vedic yajna). The sect forbids  'murtipuja' मूर्तिपूजा (idol worship). In fact in the early educational institutions set up by the sect, disciplinary action for a transgression was swift and severe~ 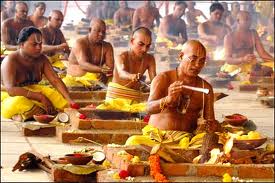 The Brahmo Samaj set up by Raja Rammohan Roy (19th cen.) also did not believe in idol worship. A breakaway faction of the Brahmo Samaj shaped the initial beliefs of Swami Vivekananda@ (19th cen) - arguably one of the most influential figures of modern Hinduism. Later in life, the Swami was mostly guided by Shankara's Advaita-Vedanta, a monistic world view which essentially left no room for idol worship (More on that later in this post).
The staunchest opponents in early medieval India were the Mīmāṃsā मीमांसा  - committed to understanding dharma (righteousness, correct conduct) on the basis of an exegesis of the Veda. They followed the aniconic  ritual programme set forth in the Veda (shunning graphic representation). For them the Veda was eternal and author-less. It has always existed the way it is, will survive cyclical cosmic dissolution (prayala प्रलय)  and was not written by anyone, let alone a god. In fact there is no God. Only the Veda. Its injunctions tell us how to conduct ourselves, and in the sound (sabda -शब्द) of its mantras, divinity is to be found. No place for images or idols whatsoever. 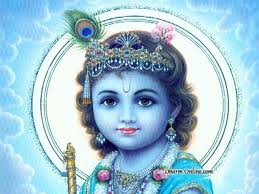 The less radical but more effective critique came from a philosophical school called Advaita-Vedanta (non-dualism), a school of thought for which the Absolute was an entity without shape or form. It was transcendental and immanent. Addressed by the neuter - Brahman - ब्रह्मण,  it is without qualities (nirguna निर्गुण), pervasive and incomprehensible. Shankara, the founder of the school demoted image worship to an inferior mode. He admitted that all of us were not capable of understanding brahman, and till such time that we did, it was 'o.k.' for us to indulge in "gross" practices like idol worship. In fact for the benefit of us lesser beings, he identified certain deities that were worthy of worship, and even wrote the most beautiful prayers in their praise.** But, according to him, as we progressed spiritually to a more "subtle" understanding of brahman, we ourselves would consider our former rituals as vaguely sinful. 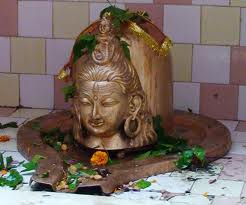 I could continue with Samkhya which is atheistic, and Yoga which side steps idol worship textually.  But this post has become long enough already, so we'll leave that for another time.
In studying for my M.A. I've realised that I've been walking around with blinkers on most of my life. If you take one thing away from this post - I'd like it to be - take what you learnt from  your school curriculum with a pinch of salt. And remember, just because revered Indian scholars, Amar Chitra Katha, and other popular depictions of Hinduism have remained silent on certain aspects/beliefs of Hinduism, it doesn't mean that they don't exist.
If anyone's interested, an excellent introduction to the schools of philosophy is M. Hiriyanna's "Essentials of Indian Philosophy" available at any good book store in India, and also on Amazon:
http://www.amazon.com/Essentials-Indian-Philosophy-M-Hiriyanna/dp/8120813049

If you want to read about how Swami Vivekananda re-wrote and 'sanitised'  the life of Ramakrishna in line with his philosophical beliefs, you must read: "Kali's Child" by J.J Kripal. It's brilliant, but expensive!
http://www.amazon.com/Kalis-Child-Mystical-Teachings-Ramakrishna/dp/0226453774

Pictures are from Google images

(This post is informed by Richard Davis (1999), Wikipedia pages, personal study and experience. And it is inspired by the lectures of Dr. Crispin Branfoot, SOAS)
Posted by Rohini Bakshi at 4:51 am

Yep.. there are innumerable paths in Hinduism and we can find every kind of option that ever existed for spirituality, (e.g. do idol worship, do not idol worship, there is one god, there is no god, the self is god, do eat fish, do not eat fish, etc etc). So yes, whatever arbitrary statement you say, I'm sure there is at least one source in Hindu scriptures to support it. That doesn't mean men that said "no idol worship" rampaged temples and broke murthi's, nor the one's who said "there is no god" persecuted those who said "self is god". This doesn't also mean Islam is the only religion that destroyed other religions. Unlike other foreign religions, Hinduism is proud to be existing thousands of years with mutual respect to other paths.

Thank you Karthikeyan, My purpose here, is not to say anything about Islam or deny desecration of idols. All I'm trying to show is plurality of Hinduism. The purpose of this blog is to focus on lesser known or deliberately ignored aspects of Hinduism. It is exactly as you say - it is an ancient religion that has many paths.

there is a strong refutation of Kripal's book by another book by Swami Tyagananda. See http://www.infinityfoundation.com/mandala/s_rv/s_rv_tyaga_kali1_frameset.htm and
http://www.gemstone-av.com/KCR3b.pdf which essentially says that what Kripal is saying does not checkout. Please see it.

Thank you for your comment, Sandeep. I will most certainly read Swami Tyagananda's refutation. If one only looks at one side of an issues/claim, it is nothing more than propaganda. All aspects must be given due weightage.

There are many Hindu Scholars well versed in vedas till date who are against idol or image worship.They say those who practice idol worship are ignorants and have no brain.They accept Islam as a religion from the creator of the world.They accept Muhammad(peace be upon him) as the "Antim Rishi" who is prophesized in the Vedas and other Hindu Scriptures in the same way Muslims believe him as the last and the final Messenger.
You can refer to the video "Muhmmad hindu mazhabon ki kitaabon me" by Moulana Jarjees ansari.He has studied the Hindu Scriptures for many many years and he quotes the Hindu Scriptures in pure Sanskrit from his memory itself.If you understand Sanskrit it will be very useful for you guys In'sha Allah.May the lord of the worlds Guide all of us to the Right path.

I think the idea of idol worship came to make convenience of worship. For example the uneducated person can't recite the mantras so they will choose the easier path i.e idol worship. This is my personal opinion what you think about this