Even if we didn’t know it at the time, most of us growing up in India received the story of Śakuntalā and Duṣyanta from Kālidāsa’s literary masterpiece – “Abhijñānaśakuntalam.” 1 For those of you who are unfamiliar with the story, here is a synopsis. The rest can skip to the following paragraph. 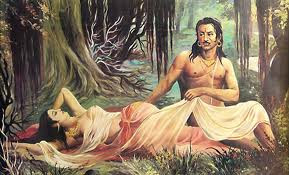 Handsome, righteous king (while on a hunt) falls madly in love with a beautiful forest/hermitage damsel.  They marry by ‘gandharva vivāh’ i.e. without any witnesses. He leaves.  She, day dreaming of him, is cursed by the choleric sage Durvāsa. As a result, when she comes to his court, he doesn’t recognise her.  A keepsake ring that should have jogged his memory has slipped off her finger in a river. The shamed and visibly pregnant Śakuntalā is carried away by her celestial mother and deposited in another hermitage where she gives birth to a strapping lad.2 Of course there’s a happily ever after. The ring from her finger was swallowed by a fish. The fisherman who finds it is suspected of theft and brought to the king’s court. Sure enough, as soon as he sees the ring, Duṣyanta remembers everything, is deeply remorseful, and after a few more twists and turns, they are united. 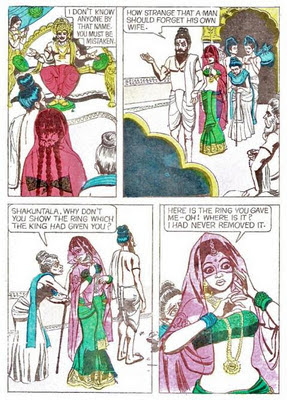 What’s fascinating is the difference between Kālidāsa’s play and its source - the original story as it appears in the Mahābhārata. In the epic version, there is no Durvāsa, no curse, no ring, no fish, and no weepy, helpless, pregnant woman who has to be rescued by her heavenly mother. The two portrayals of Śakuntalā couldn’t possibly be any more different from each other than they are.  As compared to Kālidāsa’s heroine, who is beautiful, meek, virtuous, wilting and dependent for her fate on the men around her,  the epic Śakuntalā  is steelier, and knows how to stand up for herself. In this blog-post, I’ll contrast the court scene (Act V of Kālidāsa’s play) with the  Mahābhārata version to give you a taste. Kālidāsa’s girl is veiled, and the exchange goes something like this:

King: What? Was this lady married to me before?
Śakuntalā: Ah, my heart... My Lord has a doubt about the very marriage!
King: I really do not remember espousing this lady
Śakuntalā: It is now settled that I have to deplore my fate
King: How shall I receive her, bearing visible signs of pregnancy?
Śakuntalā: Let me show you the ring you gave me ... Alas! it is missing
King: (smiling) Ready is the wit of womankind ... only lustful men are allured by honeyed words full of falsehood...
Etc. etc.
Of course he refused to accept her, and the male companions who have accompanied her from the hermitage refuse to take her back with them. At that moment, a flash of lightening shaped like a woman (Menaka, the celestial nymph, Śakuntalā’s mother) appears and carries her hapless, pregnant, weeping, abandoned daughter away.

Now let’s have a look at what happens in the epic version.  Firstly, she agrees to marry Duṣyanta  after extracting a promise from him that the son born of her will be king. She bears her child in the forest, and arrives at the king’s court six years later, with son in tow.  He flatly refuses to recognise her, even though he knows who she is. The exchange in question can be found in the Ch VII (Sambhava Parva), Bk I (Ādi Parva) of the epic, and is as follows (I paraphrase):


King: I do not remember having any connection with you. Go or stay or do whatever you please. 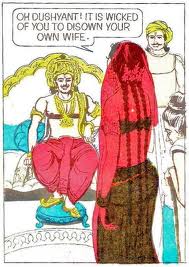 Śakuntalā’s grief turns to burning anger. Her eyes red like copper, she looks at him directly:-


Śakuntalā: Knowing everything, how can you, like a mean and inferior man, say that ‘you know nothing?’

She then proceeds to call him a thief, a sinner, and her general frame of mind may be ascertained from these selected quotes from a long monologue:  ‘You think you alone know what you did?’ ‘Do not disrespect me. I am your wife and deserve to be treated respectfully’. ‘Why are you treating me like an ordinary women in front of all these men?’ ‘I am certainly not crying in the wilderness.’  ‘O Duṣyanta, if you refuse what I ask you to do, your head today will be divided into a thousand pieces.’

King:  You are the daughter of the lewd Menaka and the lustful Viśvāmitra. Your words deserve no credence. Are you not ashamed to utter them? Go away, you wicked woman. How do I know I have begotten this son on you?

Śakuntalā: A swine seeks dirt and filth even if it is in a flower-garden ...   My birth is more noble than yours. The difference between you and me is like that of a mustard seed and the Meru (mountain) ...

She points out that the son is the image of his father and having just compared him to a swine, she tells him that he’s worse than an insect, because “even ants bear their eggs and don’t break them.” Eventually, she tells him that if he insists on ‘being united with falsehood’ and does not place credence in her words, she’d rather leave.

Śakuntalā: “I shall go away from this place of my own accord. Your companionship should not be sought after.  And know this for a certainty, that when you are dead, this son of mine shall rule the whole earth...”

At this point she turns her back to him. In this version too, there is divine intervention. A voice issues from heaven (ākāśvāṇi) telling Duṣyanta that everything Śakuntalā has said was true.  He swiftly relents, says I knew all along but people would have been suspicious so I acted the way I did , and proceeds to pacify her with affection, perfume, food and drink:

King: Dearest Lady of beautiful eyes, I have forgiven you for all the hard words you have uttered in anger. You are my darling. ... I myself know that this boy is my son. If I’d accepted him as my son (at Śakuntalā’s word), my people would have been suspicious, and my son would not have been considered of pure birth.

So, Duṣyanta was just being a righteous king, knower of dharma, just like Rāma. But as it turns out, Śakuntalā would rather be more like Satyavati than Sita. Women in the Mahābhārata rock! Of course, I’m guessing that Kālidāsa, writing for his regal audience, needed a more embroidered tale which made everyone look good. Not the king’s fault, not Śakuntalā’s fault, not anyone’s fault. Just a beautiful story, rich with poetic genius. I urge you to read Kale's translation. If you ever wondered what the big deal is about Sanskrit literature, you won't any more.

Notes:
1  The recognition (also the remembering) of  Śakuntalā
2 The eponymous Bharata, after whom India gets its Indian name.

Quotes and narrative for this blog have been taken from:

The idea for the blog arose from a conversation with Renate Söhnen Thieme, Senior Lecturer in Sanskrit, SOAS.
Posted by Rohini Bakshi at 8:16 am

Rohini -
Believe me when I say, you must must must must must continue in this work. (glad to say that nearly a year later you are at it...so good....) sooo......I do not want to deflect you from what I understood to be the original course of paying close attention to Bhagavad Gita - with my intrusions of sAmaveda mantras -
that's just my narrow (yet universe opening) focus now - 114 agni mantras - over and over and over and over and over again, with the goal that they become the fundamental "content" of my "mind" - so I am not your model good student, but assuredly, no one else, as far as I know, is reaching out as you are with these Sanskrit riches to so many people, with tools (such as twitter) capable of such vast expanse....
Kewl Rohini!! Keep the energy flowing!!!
Wayne

I do not know if it's just me or if perhaps everybody else experiencing issues with your site. It seems like some of the written text on your content are running off the screen. Can someone else please provide feedback and let me know if this is happening to them as well? This may be a issue with my browser because I've had this
happen previously. Thanks

Hi there, every time i used to check website posts here early
in the dawn, since i love to gain knowledge of more and more.


Feel free to surf to my web blog; Abercrombie Bruxelles

Wow, that's what I was seeking for, what a data! present here at this web site, thanks admin of this web page.

Hurrah, that's what I was searching for, what a stuff! present here at this blog, thanks admin of this website.

There are collectors for everything now, Heck Mass Effect Storyline are even graded, on condition just like baseball cards.
Disney Infinity requires a compromise so that its toys are
visually related and collectable.

Hi there Dear, are you really visiting this web page on a regular basis, if so then you will definitely obtain good experience.

Thanks for another informative website. Where else may I am getting
that kind of info written in such a perfect approach?
I've a undertaking that I am simply now operating on, and I've been on the look
out for such info.

Hi my friend! I wish to say that this post is awesome, nice written and come with almost all vital infos.

Good post! We are linking to this particularly great article
on our site. Keep up the good writing.