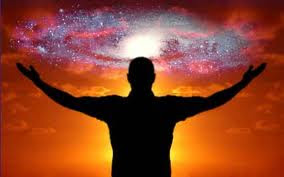 My last post was Patañjali cautioning us that siddhis are a distraction on the path to samādhi, and must be ignored. Yet he spends nearly an entire chapter enumerating and describing the siddhis. The process of achieving samādhi is a complex one and best learnt from a practising expert. However one can get some understanding of how siddhis arise by looking at sūtras 1-6 of Ch 3. I.K Taimini describes  reading the yogasūtras as having a map - it can give you an idea of distance, topography etc., but unless you visit the place, experience it yourself, you will not really know the reality of what is there.

The confining of the mind, or thought process to one particular spot is called dhāraṇā. Expert commentators tell us that it could be an actual spot (bindu), a yantra, an image of a god - be it Krisha, a baby Jesus, a mental or physical image of the sun or moon or even an apple. It depends on what can hold your mind in the strongest way.

तत्र there, in that place
प्रत्यय content of consciousness (whatever your mind is thinking of in dhāraṇā)
एकतानता - stretching, an unbroken stream (of the same thought)
ध्यानम्  is meditation, contemplation
So when our parents told us as kids ध्यान से पढ़ो (study with dhyāna) they meant be attentive to the exclusion of all other thoughts, and now you know where it comes from!

When there is consciousness only of the object (being concentrated upon) and not of the mind itself - this is samādhi.

Basically, the mind loses awareness of itself, and only consciousness of the object remains. 'svarūpa śūnyam iva' The mind's own form disappears, as it were.

Swami Vivekananda in his commentary on PYS says that the powers of the mind are like rays of light dissipated. And when concentrated, they illumine. (A bit like rays of the sun being concentrated by a magnifying glass.) He says there is no limit to the power of the human mind, and the more concentrated it is, the more power is brought to bear on one point. He exemplifies by referring to a chemist working in his lab or an astronomer studying the stars through a telescope. What they achieve is the result of concentration.

When this concentrated power of the mind saṃyamaḥ, the composite of  dhāraṇā, dhyānam, samādhiis is applied (विनियोगः)  it pierces the outer form of an object to unravel its inner reality. And the practitioner, the yogi gains to access to knowledge way beyond the ordinary. For instance by applying saṃyamaḥ to sound, he/she can understand all language, and sounds made by any living being (3:17).

From the next post, I will translate individual sūtras in detail.

It's hard to come by experienced people on this topic, but you seem like you know what you're talking about!
Thanks
pinterest.com/pin/523825000378301161/
Also visit my webpage - psycho

Thank you so much for this encouraging comment. I try not to rehash - I try to connect directly with the material and present it as objectively as possible. Suggestions are also always welcome, if you want to read about something specific.
Rohini