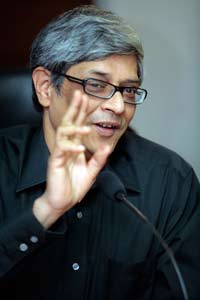 Please welcome guest writer Bibek Debroy, who scarcely needs an introduction.* Bibek has kindly agreed to write a monthly column on concepts relating to Hinduism on this blog. He kicks off the series with some searching thoughts about the correspondence (or rather the lack of it) between the religio-philosophical lexicon of Western thought and Hinduism. For an enduring comprehension, it is critical to  understand a system or a concept in its cultural, linguistic and historical context, and Bibek sets the scene for just such an understanding in this introductory piece.

I hope to write this series once a month and I have chosen to call it dharma, artha, kāma, mokṣa.  Those aren’t terms I will talk about in this first piece. They will come later. I often meet people who say they are atheists or agnostics.  I feel uncomfortable with those terms, because I don’t know what they mean. Take the word “atheism”. It comes from a Greek word “atheos” meaning without “theos”. “Theos” is god. Therefore, atheism or atheist is a negative word. I don’t understand what atheism/atheist means unless people who use it tell me which god this is with reference to.  Whose existence is being negated?

The word agnostic is no different. Actually, one should say “agnostos,” which is the original word, a+gnostos. Gnostos means something that can be known.  Therefore, a+gnostos actually means to be against knowledge. That’s not logically tenable, is it? How can anyone be against knowledge?  It is a different matter that atheist came to be interpreted as someone who didn’t believe in god, theist as someone who believed in god and agnostic as someone who believed that god could neither be shown to exist, nor not to exist.  The background of agnostic was the gnostic movement that existed within the Christian church.  All these terms, atheist, theist, agnostic are with reference to a context, and that happens to be Western. I would strongly advise against using them in the context of Hinduism.

Let’s think of the word “Philosophy,” again closely allied with another Western word, “religion”.  How will you translate the word philosophy in Sanskrit?  Philosophy means the love of wisdom, or love of knowledge. The Sanskrit word दर्शन (darśana) is so much better.  It carries the nuance of sight.  Traditionally, there were six schools of Hindu philosophy – sāṃkhya, yoga, nyāya, vaiśeṣika, mimāmsā and vedānta.  There were further divisions later.  If you ignore the later divisions, did any of these believe in a god in a Western sense?  With the exception of  Vedānta (where you can both say yes and no), the answer is not really.  Hence, आस्तिक (āstika) in an Indian दर्शन (darśana) cannot and should not be interpreted as belief in a god. By the same token, नास्तिक does not mean disbelief in god.

As those terms I have given for atheism indicate, it was more about not believing in the Vedas.  Let me leave aside Buddhism and Jainism.  I don’t have sufficient knowledge about either.  In addition to those six schools, we also had the ājīvika and lokāyata schools, the latter associated with cārvāka.  These are described as नास्तिक (nāstika) and again the reference is essentially to non-belief in the Vedas.  We will return to these issues later.  For the moment, when I am asked “Do you believe in god?”, I don’t know what to answer.  And my problem is not that such a question is asked by Westerners.  That I can accept.  My problem is that I am also asked such questions by Hindus who have accepted a Western discourse.  Let’s stick to our discourse and stop asking and answering such questions.

When confronted with questions about religion, there is another English word I have a lot of discomfort with and that is “proof”.  The best Sanskrit word for proof is प्रमाण (pramāṇa).  The nyāya school had quite a bit about logic.  Don’t worry.  I have no intention of getting into details about what each of these schools proposed.  For the moment, in the process of getting proof or प्रमाण, the nyāya texts talked about four different methods –प्रत्यक्ष (perception), अनुमान (inference), उपमान (comparison) and शब्द (testimony from those you can trust). Perhaps one should say a little bit more about प्रत्यक्ष.  Those nyāya texts divided perception into two types, the first being लौकिक (laukika) or साधारण (sādhāraṇa).  This is essentially what we perceive through the senses.  The second type is अलौकिक (alaukika) or असाधारण (asādhāraṇa).  We look at everything through the lens of science now.

We demand proof.  But when we demand proof, we really mean proof based on the senses.  Let me leave you with some thoughts to ponder.  First, while we pretend in our beliefs that everything is based on sensory proof, is that really true?  Or do we quite often depend on inference, comparison and testimony from others? Second, are our senses infallible?  Third, science also often depends on measuring instruments, not on human senses, precisely because human senses are fallible.  The accuracy of measuring instruments varies and improves over time.  Has science itself not been wrong on several counts, several times?  I will recommend a book to you. It is by Christopher Chabris and Daniel Simons and it is titled “The Invisible Gorilla” (2010).**  This is about how our cognitive senses often go wrong.  Therefore, this series is about being less arrogant about knowledge based on our physical senses.  Arrogance, in any form, is against knowledge.  Next time, be a little careful before saying that you are an atheistic or agnostic, or that you do not believe in god.  I have deliberately left the expression “Hinduism” dangling.  But this is only the first of a series.

* More information about Bibek Debroy can be found here:

**Chabris & Simon's book can explored here: http://www.theinvisiblegorilla.com/
Posted by Rohini Bakshi at 8:36 am

We do not have a term to describe people who don't believe in tooth-fairies or flying spaghetti monsters or unicorns or leprechauns. But we do have a word for those who do not believe in the concept of a celestial supervisor who intervenes in our daily lives, and can even convict us of thought-crime. And it is so, because a belief in such a supernatural element has profound implications.
The question in the Hindu schools is probably more of the kind that deists grapple with. But in this case, we don't have a corresponding "adiests", and have to contend with atheists, even though it may be a pejorative for many, much like "nastika".

Oh! I'll definitely be interested in hearing more from your group. I use the Twitter handle @sidsharma27

The sanskrit word ज्ञेयम् means the same as gnostos. If it is agnostos, sanskrit word could be अज्ञेयम्।,that which cant be known. Also aastika does not mean one who does not believe in God or scriptures. Debiprasad Chattopadhyaya lists schools like "Poorva Mimamsa" under atheism in his book "Indian Atheism"

@Phani Kr - You are right I think; the right word could be agyeya... A better word still could be "aprameya" - one beyond proof - which is commonly used.

@Siddhartha - you seem to be using Richard Dawkin's worldview (even vocabulary!) Pl note it is far removed from the Hindu context and this is what this article clearly argues too. So I feel you are raising a question which while is appropriate for discourse in the Western world, is really not useful for Hindus - we are trying to solve a problem that does not exist.

@AJ It is true that I am deeply influenced by the ideas of "The Four Horsemen", but I haven't plagiarized a bit, if that was what you were trying to insinuate.
Besides, I was just offering my opinion about why we needed a negative term to start with. It is something like "Manovigyan" for psychology. We needed it, and we probably couldn't come up with something better. Same holds true for how all Hindu religious cults were branded as an all-encompassing "Hinduism". This however, has nothing to do with my world view.

Its good to know these.

Good to know these

I so wish Javed Akhtar Sahab (forecfully self-proclaimed atheist with 0 tolerance for any other view) read this, especially the last paragraph !

As I had heard from Jaggi Vasudev "I don't know' opens up all possibilities in life and beyond -:)