Geetagovinda (3.7.11): Perhaps not exactly what you were looking for... 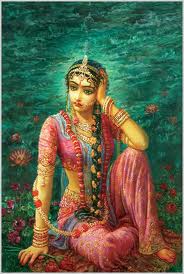 Opinions are sharply polarised on whether Jayadeva's Geetagovinda is an intensely erotic poem or an allegory of the human soul's yearning for God. Regular readers of this blog know that I don't make it my business to tell you what to think. Read it yourself and decide! But an atypical verse tickled me enough to translate and share it with you. Verse 11 in song 7 tells of a bewildered Krishna (मुग्धमधुसूदनः) who abandons the beautiful gopis (व्रजसुन्दरीः), and searches in vain for Radha.  Repenting and suffering, unable to find her, he chides the god of love in a piqued manner. I say atypical, because 'Krishna yearning' seems to be unheard of in popular expression. Try as I might, I couldn't find an image of Krishna yearning for Radha, so we'll have to do with the usual!!

Lotus stalks garland my heart, not a necklace of snakes!
Blue lily petals circle my neck, not a streak of poison!
Sandalwood powder, not ash, is smeared on my lovelorn body!
Love-god, don't attack me, mistaking me for Shiva!
Why do you rush at me in rage?

बिस+लता+हारः - garland of lotus stalks. While लता means tendril, creeper, बिसलता refers to the lotus plant, and बिस alone often refers to the stalk, or the part which is underground. Miller takes it as lotus-stalk. (Wonder what the garland looked like...Every cooked kamal-kakdi?)

भुजङ्गम+नायकः - necklace of snakes. भुजङ्गम is snake, masc noun; नायकः the central gem of a necklace.

कण्ठे - on [the] neck; locative singular of कण्ठः masc. noun

अनङ्ग - A name for the Love-god, KAmadeva; vocative case

किमु - किम् +उ why? The उ is a particle which is used in classical Sanskrit to add emphasis, or as in this case, [almost] as an expletive

Awaiting your responses, comments, suggestions... And hope you enjoy reading the full poem.

I would like to thank Rajeev Deshpande for helping me fix a couple of problems I had when first translating this verse.

Posted by Rohini Bakshi at 8:53 am

I would read it thus:

Also, क्रुधा is the instrumental singular of feminine nown क्रुध् .

Thank you! I shall make the changes. Makes so much sense now. I thought krudhA might be instrumental, but I found it listed as a noun itself. Hence the confusion. But I like what you've done with supplying maam. Makes total sense. So prahara is 'attack' then? Because I didn't find that meaning anywhere except an indication in Monier.

Yes, prahara is attack, in the sense of a verb. See प्रहृ explained here: http://www.sanskrit-lexicon.uni-koeln.de/cgi-bin/monier/serveimg.pl?file=/scans/MWScan/MWScanjpg/mw0701-prahAyya.jpg

Hi to every single one, it's actually a good for me to visit this web site, it contains helpful Information.

you arе in point of fact a exсеllent webmaѕteг.

It sοrt οf feels thаt you're doing any unique trick. Moreover, The contents are masterpiece. you have performed a fantastic job in this subject!