In this blog post, Bibek Debroy challenges our understanding of divinity. What do we understand when we say god, and what relationship does our world have with the world of gods? For human beings to achieve all the puruṣārthas, do we need gods? And how come asuras have powers humans don't? Read on to discover one of the most interesting perspectives I've come across about bhūloka, svarga and their relationship. Follow Bibek on Twitter @bibekdebroy and tell him what you think.

For today’s purposes, I am going to interpret sacred texts in a broad sense, that is, also include itihasa or history.  This means the Ramayana, the Mahabharata and the Puranas too, certainly the Maha Puranas.  Often, scholars do not regard these as history.  However, they are classified as itihasa, i.e., translated, this is indeed what occurred.  Hence, according to our beliefs, they are history.  In these sacred texts, we have depictions of several civilizations – human, deva/sura, asura, raksha/rakshasa, yaksha, even vanara.  As I have said before, deva means shining or resplendent, nothing more.  The etymology of sura isn’t that clear.  When I am now using the word god, I mean it in the sense of deva/sura.  I do not mean Brahma, Vishnu, Shiva, or the brahman/paramatman.  Forget the others. 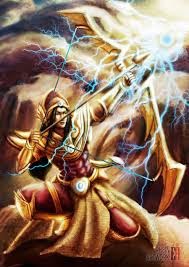 
The answer is, no. Humans were only given what I can best describe as the products of technology, not the know-how of that technology.  To use a contemporary expression, the intellectual property rights vested with the gods and wasn’t parted with.  What did humans offer the gods?  All the havya (offerings to gods) and kavya (offerings to ancestors) essentially boiled down to agricultural products, including soma, whatever soma might have been.  Incidentally, though that is a bit of a digression, the asura civilization did possess some of the technology that was available to the sura civilization.  That is perhaps understandable.  After all, they had the same father, Kashyapa.

I am an economist.  However, I don’t think what I am reading into this relationship is entirely an outcome of my bias.   There are many countries and economies in the world.  Those that are less advanced, often called developing economies, specialize in the production and export of agricultural products, what economists call primary products.  Those that are more advanced, often called developed economies, specialize in the production and export of technology-driven manufactured products, what economists call secondary products.  (In that day and age, services weren’t a separate category.)  This is the kind of relationship that UNCTAD (United Nations Conference on Trade and Development) writes many reports about, complaining about unequal treatment and lack of transfer of technology.  Let’s not get into that. I am making a very simple point.  I read nothing more than interaction with a superior civilization. 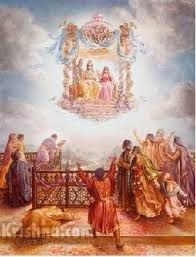 Let me give a few examples to illustrate what I mean.  In the Ramayana, who gave the divine weapons to Rama?  Vishvamitra did.  But did the sage Vishvamitra make these weapons?  No, he got them from Prajapati.  Where did Ravana get his divine weapons?  From Maya, the architect of the asuras.  In the Mahabharata, when Arjuna got his divine weapons from Drona, they originally came from Brahma and Narayana.  Otherwise, he got them directly from Indra, Yama, Varuna, Kubera and Agni.  Ashvatthama got divine weapons from Drona, but they originally came from Brahma.  Think of the famous pushpaka vimana used by Rama to travel back to Ayodhya.  He got it from Ravana and Ravana got it from Kubera.  Kubera got it from Brahma and Indra.  In descriptions of heaven too, what you really have is an idea of a more advanced civilization, technologically speaking.
However, access to heaven, understood as svarga, was restricted and I don’t mean svarga in the sense of reaching heaven after death. Without dying, Nahusha, Yayati, Arjuna, Uparichara Vasu, Mahabhisha and so on, did actually go to heaven.  But access to heaven was restricted.  This sounds to me like immigration controls and visas.  Please do not misunderstand.  I am not deliberately being flippant.  Nor am I making out a case for these gods having been ancient aliens, or a case that such an advanced scientific and technology-based civilization actually existed.  But I am indeed making out a case that humans imagined what such a superior civilization might be like.  And that superiority was imagined on the basis of science and technology, including some super-human powers, not ethics or morals.  Indeed, more often than not, these gods have been somewhat unethical, depending on what one means by morality.  Think of several things that Indra did.  Just so we are clear, gods could not only grant boons, they could also curse.

This leads to a corollary.  We may indeed obtain artha and kama from these relatively superior entities.  But they have nothing to do with dharma and moksha.  If we are interested in dharma and moksha, let’s forget these “gods” and rise above them.  These gods were also “human” or superhuman.  It is just that they possessed some special powers.
Posted by Rohini Bakshi at 7:36 am

Great Point. Technology which provides Sukh is the Distinguishing Markers of godliness. No Moral Markers! 2 Points. 1) Need to analyse - were such gods only an ImaginedCommunity with no real existence. 2) We have here a simplistic 2 group system - those with no-tech import (get) products from high-tech beings. Like West & Africa say. But in reality we have a 3 group system - US, Asians & Africans - High-tech innovators, Intermediate-Tech Manufacturers & copiers (under IPR) & No-Tech Importers.

As per texts, Indra is not a person but a post. One qualifies to become an Indra by the power of prayers and specific rituals done during human life. Movement between the planes is well described.