Samskrit or Sanskrit? The Mighty anusvāra 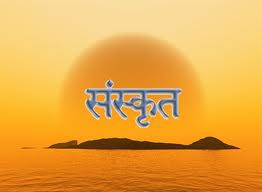 Last week, we had a bit of a flutter on the English spelling of संस्कृत in our Twitter group. Some people spell it Sanskrit, others Samskrit or Samskrut. I think this is the perfect opportunity to revisit the अनुस्वार (anusvāra), which, as you know, is the dot above the line in a Devanagari word. It marks a nasal sound (anunāsika). For example in संस्कृत, कंकर, गंगा, चंचू  रंजन, दंत, पंपा I I'd like you to study this table* before we proceed: 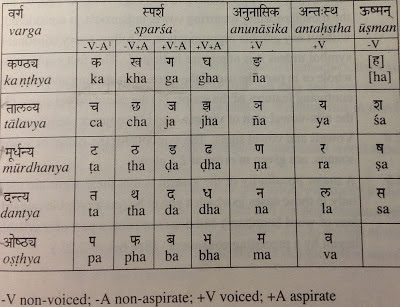 The confusion is caused by the way Sanskrit is transliterated/romanised. The anusvāra is represented by an m with a dot underneath it - 'ṃ'. This is pronounced according to its surroundings. When it precedes consonants from the five rows of stops i.e क varga, च, ट, त & प varga - it is pronounced as the 'varga' nasal - which means गंगा is गङ्गा,  चंचू  is चञ्चू ,  रंजन is रञ्जन, दंत is दन्त and पंपा is पम्पा I

In academic writing if you leave the dot out from under the m, your marks will be cut for making a spelling mistake. But outside the classroom, it doesn't seem to matter so much. Hence the confusion.

As you can see from the table above, स, श, ष and ह are also assigned to the five vargas by ancient grammarians. Since the anusvāra precedes a स in "Sanskrit", and स belongs to the त varga, the anusvāra denotes a न, not a मI So you know right away that 'Samskrit' is incorrect. The English/romanised spelling with 'm' is a misguided attempt to represent the anusvāra of the Devanagari spelling - but without a dot below the 'm' it neither corresponds to the spelling, nor to the pronunciation.

Now coming to 'kri' vs 'kru' for कृ।  The syllabic ṛ was lost in India by the time of the Pali language long before the common era. It has been  pronounced either ri in North and East India, and ru in Western and Southern usage. So the verb गृह्णामि (I sieze/grab) is pronounced gruhṇāmi in some parts of the country, and grihṇāmi in others. So too, with Sanskrit vs Sanskrut. In the sense that it is attested local pronunciation, kri vs kru is neither right nor wrong. It's just what you grow up with.

I would like to thank @kishoredattu for raising this question, and  @thinkeron and @deshrajeev  for contributing their thoughts and response to it.

It is also an opportunity to revisit transliteration in general. Pl see the table here: http://en.wikipedia.org/wiki/International_Alphabet_of_Sanskrit_Transliteration)

I am guilty of simplification myself. Throughout this post I have spelt this famous past participle as 'Sanskrit' for reasons of convenience, because we are used to it. Really it should be saṃskrita. Also because the त at the end is actually त् + अ  like अनुस्वार is anusvāra  not anusvār.


*The table is taken from Robert & Sally Goldman's Sanskrit Primer.

I'm eternally grateful to Dr. Renate Sӧhnen-Thieme not just for her help in understanding this topic, but for helping me realise how precise Sanskrit is.
Posted by Rohini Bakshi at 8:54 am

You know by now I esteem your work as most extraordinary of lasting value...keep it lit with the energy of agni

Rohini -
You already must know I esteem your work - it is most extraordinary, and of eternal (yes) value - keep the energy of agni in your cells - all this will be a garland of roses for the future....
Wayne

What is the transliteration of संशय ?

I recall V. Apte stating why he used the anusvaara to represent all 5 nasal consonants in his dictionary. Even if that was to facilitate printing Sanskrit words, it was a wise decision taken by a renowned scholar. Thanks. Haresh.

Sorry about asking stupid question but as trying to understand Sanskrit.
Should Pankaj be called "Pamkaj" similar to Pampa?

"I'm eternally grateful ... for helping me realise how precise Sanskrit is."

This is precisely the reason I am inclined to disagree that:

"kri vs kru is neither right nor wrong. It's just what you grow up with."

Isn't this a perversion or distortion of the language, the very thing Panini is so highly praised for preventing by preserving the purity of the language with his clear rules? Doesn't this tolerance for distortion fly in the face of "sanskrita", highly polished and precise? Doesn't Panini give the precise pronunciation for ṛ as for the other letters?

As for the rest of this blog, thank you very much for answering several other burning questions I've had!