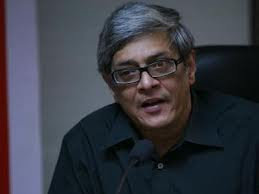 Continuing his series "Dharma, Artha, Kāma, Mokṣa," this month Bibek Debroy introduces core beliefs in Hinduism. Despite appearing to be a myriad of sects, Bibek explains that the bedrock of Hinduism is a set of  commonly held beliefs. He begins  with the most central: ātman. I am in complete agreement when he says that Ādi Śankarācārya’s निर्वाण षटकम्  best explains ātman. Read on to find out more, including his experiments at Cambridge!!

Let’s come back to the question of Hindusim.  What do we mean by Hinduism?  What are its core beliefs, regardless of which school one has in mind?  Cutting across all schools, we have a core belief in the existence of the आत्मन्, as distinct from the physical body.  For the moment, let’s ignore questions of rebirth and the doctrine of karma. Let’s also ignore concepts of yoga and union between the ātman and the paramātman/brahman. Those will come later and there are differing perspectives on those. But everyone who professes to be a Hindu will believe in the ātman.

Neither is this [ātman] born, nor does it die ever,
Nor having been, will it again come not to be,
Unborn, eternal, perpetual, primaeval,
It is not slain when the body is slain.

On this point, I actually prefer Ādi Śankarācārya’s निर्वाण षटकम्. It has six ślokas. This is Vedānta.  But I am not on the Vedānta part right now.  Therefore, those who know the original will realize that I have knocked out the last line of each śloka. That will come later. Some people may know that Swami Vivekānanda translated this. I could have given my own translation. But since Swami Vivekānanda translated it, one might as well stick to his translation.  With that last line of each śloka knocked out, here goes:

I said that I am going to excise Vedānta, for the moment. The purist will say that despite eliminating that last line, I haven’t quite been able to do that. But let that pass for the moment.  Independent of Vedānta, I think most people comprehend that the ātman is not the body, nor the five organs of sense (sight, taste, smell, touch, hearing) or the five organs of action (feet, hands, anus, genitals, mouth).  Therefore, when the body dies, the ātman does not die.

Students are poverty-stricken, everywhere in the world.  When we were students in Cambridge, there was a professor of Physics there.  He had already received the equivalent of tenure, so he could “research” whatever he wished.  And he asked for student volunteers as guinea pigs, promising them small sums of money if they volunteered.  I was one of those who volunteered and the experiment was the following.  We went to sleep, hooked on to all kinds of gadgets and measuring instruments.  The idea was that when people slept, the soul (obviously he didn’t call it the ātman) would leave the body and roam around.  These sensitive measuring instruments were supposed to detect the departure and return of the soul, in these out-of-body experiences.  As far as I know, the professor met with no success.  Nothing registered.

There is a story about Catherine the Great of Russia (Catherine II) and the philosopher Diderot, who was a bit of an atheist.  This bothered Catherine the Great and the other courtiers.  Euler, the mathematician, was also around and was summoned to help.  Diderot knew nothing about mathematics.  Euler went up to him and said, “Sir, (a+bn)/n= x.  Hence, God exists!” (Actually, he said it in French, but the English will suffice.)  This embarrassed Diderot so much that he vanished from the court.  Whether it is God, or the ātman, we tend to ask for odd kinds of proof.

Be logical.  Do you believe in the concept of ½?  Of course, you do.  But have you ever actually seen ½? Of course, you haven’t.  No matter how precise the measuring rod, when something is broken into two equal halves, will each part be exactly half?  It won’t.  Yet, we believe in the concept of half.  If I give you an equation that says 1+1=11, you will say this is wrong.  Yet, it is perfectly correct, if I am using the binary system.  If I say, two parallel lines do not meet, that’s apparently correct, but only on a plane.  On the earth’s surface, lines of longitude do meet.  The point I am making is that scientific proofs can be axiomatic, or they can be empirical.  At an axiomatic level, I see nothing that one can complain about vis-à-vis the concept of the ātman.  As an axiomatic structure, it is perfectly coherent.  Therefore, if the ātman is being questioned, it is on the level of the empirical.

We will continue with this line of reasoning next month.
Posted by Rohini Bakshi at 3:34 am

Was your Physics Prof a Jew :) ? They believe "roaming of Souls" during sleep.....Sir what about Carvaka's Philosophy?

Dear hc, Dr. Debroy would like to respond to your comment: "I have no idea whether the Physics Professor was Jewish. Charvaka will come later. But on this one, not future ones, no conflict with Charvaka."

All corrections have been made as per your observations :-)

Will wait for the Charvaka's part eagerly. "Atheism" has been an integral part of Hinduism for long. Though in recent times it is kind of forgotten.

One comment on Euler's proof as mentioned in the writing. Here is a counter proof of Euler's proposition, That is "Because (a+b^n) = x; God exists". My counterproof is, as (a^b+b^c)=(p+q); Therefore God doesn't exist. It is a very old technique. When you can't convince, then confuse. Also axiomatic proofs are more valid, because the simplest possible facts or brutally tested facts are considered as axioms. If an axioms failed one single test, it is immediately revised or discarded. That is not the case for any "belief" or "faith". So please stop confusing people with bad logic. That is unethical.

Interesting to read.
The concept of life after death and/or 'Atman' avoid us from acting in bad way.
According to me, a person can be called as atheist only if he/she does not agree with the concept of life after death, and not when he/she does not believe in God.
Let people un-believe in God, they are not atheists...Unless they agree with the above concept.

Prof. Debroy,
Thanks for a superb article. Really enjoy reading your writings. However I remain unconvinced about your larger point about the Rationality and Religion.
Rationality as I understand it is not about empirical or a priori argumentation, rather I define it as willingness to modify our understanding in light of changing circumstances. It is an attitude of mild irreverence, and in this respect I find Religion--no matter how sophisticated-- a bit problematic.
Let me explain my point with a concrete example in the context of Hinduism. Take the idea of consciousness. Can it be explained mechanistically? Almost all Indian philosophical schools critique Charvak's notion that it can be. Charvaka's philosophy is presented in Purvapaksha and demolished to make way for Uttarapaksha that there is indeed something enigmatic and mysterious about consciousness.
But the philosophical importance of computation is precisly that it is a way of mechanising consciouness and the long-term goal of the field is to dispel the very mystery of consciousness that most schools of Hinduism take as the point of departure.
Now what will happen if it happens, as it seems likely, that Charvaka was right? If it turns out that all components of consciousness, including the highly mysterious Self, can be created in a computational simulation.
Will we be able to change and modify our sacred scriptures? I personally think we should, but consider it highly unlikely.