To my mind this verse is an expression of the exceptional brilliance of the religious elite, the author(s) of the Gita. I have mentioned before that the Gita is a pivotal text, bridging 'old' Vedic ideas and 'new' Bhakti influences. How to reconcile the Vedic sacrifice (which was completely about external action and compelling Vedic gods to attend to the yajamāna)  with the 'new' thinking of the Upaniṣads, whose focus was internal, and monistic? How to bring on board the old school, and avoid a schism in the religious community? This verse shows how to achieve the impossible. How to amalgamate opposites. 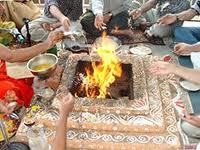