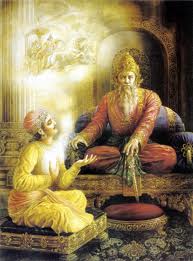 Assembled on the field of dharma, Kurukshetra, what did my sons and the sons of Pandu, desirous of battle, do?

Most Hindus are familiar with the opening of the Bhagavad Gita, where the battlefield is called the field of ‘dharma’. But do any of us ever ask why? Modern interpretations of the Gita in India mostly follow the early theosophists' position of allegorizing ‘Kurukṣetra’ as a war between good and evil within every person in which finally the evil forces, senses, and urges are destroyed. Undoubtedly this is true.

But there are other interpretations. I believe it is called dharmakṣetra, because it was a war for the normative definition of ‘dharma’ itself. What is ‘right’ and what is ‘wrong’? To us today, the answer seems obvious. But 2,000 years ago, it wasn’t. Was killing animals in sacrifice right? Was killing justified in any circumstances? Was it right that an entire section of men and all of women were excluded from education, indeed from salvation itself? Was ahiṃsa the better way?

The scene opens with the despondency of Arjuna and a series of complex, ethically knotty questions which are answered by his charioteer - later acknowledged as the Supreme Lord. In a previous post I have called BG IX:26 a watershed. I believe that the setting of this battle, in fact the Bhagvad Gita itself, is a turning point in the History of Hinduism. It represents the reaction of the Brāhmanical Vedic religion to the spiritual, ethical challenges it faced in the second half of the 1st millennium B.C.E. The Bhagvad Gita show how these challenges were addressed and eventually assimilated.

The whole question hinges on what ‘dharma’ is. I don’t mean what is the definition of dharma, rather what is the ‘correct’ dharma? The Brāhmanical Vedic religion was a religion of blood sacrifice, of rigid institutional hierarchy. Of exclusion rather than inclusion. Universal values such as mercy, kindness to all, equality of mankind, ahimsa etc. had not yet become significant features. For at least five centuries the śramaṇa movements, of which Jainism and Buddhism are most well known, challenged Vedic Hinduism. The espousal of Jainism and Buddhism by powerful kings of the Mauryan Empire, especially Aśoka, forced the religious elite to go back to the drawing board and reassess what ‘dharma’ should be. One of the central threads of the Bhagvad Gita is this definition/redefinition, or as I see it, the synthesis of old and new ‘dharmas’.

In light of this background, the blind and helpless Dṛtarāṣṭra’s concern for the outcome takes on a new meaning. What will become of the old ways? What does the future hold? Which side will win? Arjuna’s ethical dilemma represents the struggle between the old way of thinking about fundamental issues like ‘killing’, especially his own kin. After deep consideration, everything eventually falls into place when the Supreme Lord manifests himself and speaks what will become gospel for generations of Hindus to follow.

In a couple of our earlier stories I have talked about the power struggle between the Kṛṣṇa and early Vedic gods. The Bhagvad Gita is the triumphant expression of Kṛṣṇa’s prevalence in that struggle. From this point in time, He is the Supreme Lord. And this event marks the de facto demise of the old Vedic way. What emerges is Hinduism as most of us practice it today. As Bhakti to a personal God.

This post draws heavily on Israel Selvanayagam's article "Aśoka and Arjuna as Counterfigures Standing on the Field of Dharma published in  History of Religions, Vol. 32, No. 1 (Aug., 1992), pp. 59-75

Posted by Rohini Bakshi at 2:41 am