Krishna releases the sons of Kubera 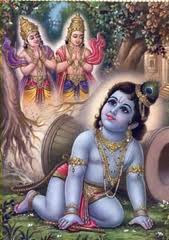 This story can be found on pg 73 of Swami Tapasyananda's translation of the Śrimad Bhāgavatam, 1981. ed.

From this point on, we introduce the dual form. Unlike most languages that we are used to which have a singular and a plural, Sanskrit has a dual, which refers to 'two'. It is called द्विवचन. It is less common than the other forms, but naturally we have to learn it. This story may seem a bit difficult as compared to what has gone before, but by the time we get through it, all will be clear.

A few things to note:
1. The ending of the dual noun
2. The form of the verb which agrees with the dual form
3. That all adjectives etc (anything other than an indeclinable) will agree with the noun.

पुत्रौ नारदेन शप्तौ भवतः
The (two) sons are (literally - become) cursed by Narada.
नारदेन =by Narada
शप्तौ agrees with पुत्रौ, just like गर्वितौ in the first sentence. शप्त* is past participle from the root शप् , like मृत*  (dead) which becomes मृतः or मृता, depending on the gender of the noun it is describing. You met this in the story of Putanaa. Here too there is agreement - with putrau
भवतः = verb from the root भू, agreeing with the 3rd person, masculine, dual form. So far you have met bhavati, which agrees with Krishna, or putra etc.


She ties Krishna to a mortar
उलुखे is the locative (7V) of ulukhalam (neuter noun). The locative is used to show where Krishna is tied, whereas in Hindi or English we would say he is tied 'to'
बध्नाति is the verb form from the root 'badh' meaning to bind/tie, agreeing with Yashoda


He goes between the two trees
वृखयोः = the dual, locative form. This is completely new, so please pay extra attention to this form.
मध्ये - is the locative 7V of madhyam, which we are familiar with from Hindi
उलुखेन वृक्षौ छिन्नौ भवतः
By the mortar, the two trees are cut (probably translates better as felled in this context), but chinnau is from the root chid, to cut.


The two trees fall.
Note the ending of the verb - patataH, which is the same as bhavataH, staH and pravizataH. (z is श by the Harvard Kyoto transliteration scheme. As I have requested you, we will use either IAST or HK, depending on what keyboard facilities are available. You can find the scheme here: http://www.sanskrit-lexicon.uni-koeln.de/monier/help.html


Inside the two trees, are two men
वृक्षयोः locative dual 7V
अन्तः inside (indeclinable, so the ending doesn't change with the dual form - remember avavya - the words that don't change their ending)
पुरुषौ two men
स्तःare - verb agreeing with puruSau