You'll see various translations of this verse. As ever, I quote Patrick Olivelle: every act of translation is an interpretation - so I will not comment on why 'bow to' or 'resort to' feature in some versions of this dhyāna verse. Here is the literal translation, with a note on some grey areas. I've broken it up a bit so you can see what the words are.

कमलजः is another name for Brahma - 'born of a lotus'
हरि of course is Viṣṇu and स्वपिते+हरौ is a sati saptami, a locative absolute meaning 'when'. स्वपिते comes from √svap - to sleep
अस्तौत् - 3rd person, sing., past from √stu - to praise, extol

The rest are compounds/adjectives in the 2nd vibhakti/accusative case describing Devi and her attributes. All in the accusative, because I am doing something to her - praising/serving देवी को.

त्रिनयनाम् - three eyed one को
सर्वाङ्ग+भूष+आवृतम् - all (her) limbs adorned (with) ornaments (को)
आस्य+पाद+दशकां  - (she) who has ten faces and ten feet (को)
नीलाश्म+द्युतिमा - of the one who shines/is luminous like a sapphire (blue stone) Since this is a fragment of a larger compound, I've left it in nominative, but were it on it's own, it too would be in the accusative
संधतीं+करैः holding 'by' her hands (this is in the plural not the dual, so maybe that is where the idea of 'more than two' hands come from. संधतीं present participle, fem.)
परिघान् - iron clubs (acc. plural)
खड्गं - sword
चक्र - disc
गद- mace
इषु - arrow
चाप - bow
शूलं - spear
भुशुण्डीं - a sort of weapon
शिरः - head/skull
शङ्खं - conch
(Note: when not part of a compound, even the weapons are in accusative, because she is doing something to them - she is holding them -  करैः instrumental plural, हाथों से) 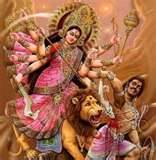 Posted by Rohini Bakshi at 7:29 am

I had been searching for almost 10 years, if there is a book which takes some religious script yes like Durga Saptashati and explain grammatical context. Thanks a lot for this. Appreciate your efforts and hard work.Prof AB Patli, Pune

nice post! Really it's worth reading, I want the entire durga mantra which will be chanted during navratri puja for 9 days. Can you please provide it.

i am searching any book give detail description of Durga saptasati 700 slokas ,which contain many Sanskrit sandhi words.It is very difficult to know the sandhi words with meaning.Can you please help me out in this regards.

Sir
Please give the the details how to get this book with full description eg word to word meaning..
With best regards
Vijay