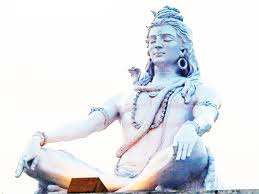 I have been asked very often what this mantra means. And though I've recited it for years, frankly I was never sure.  All I knew was it had something to do with Shiva saving me from death, and that was good enough! I've seen many interpretations on the net, a lot of which make sense in themselves, but don't really add up on the grammar. So here is my understanding grammatically. If you disagree, please do write in. This blog is meant to be a forum for discussion - not a shastri talking down to plebeians...

Now the 'anvaya,' which just means making a prose sentence of the verse. Actually it's very helpful for precision. Because you cannot conveniently leave out what you wish, or changie meanings as it suits you. You'll be surprised how many 'experts' do that. The verse reads:

त्र्यम्बकम्  सुगन्धिम्  पुष्टि-वर्धनम् यजामहे
उर्वारुकम् इव बन्धनात् मुक्षीय
मा अमृतात्
त्र्यम्बकम् - ambaka comes to be understood as 'eye' in later times - three eyed. In early Vedic texts it retains the meaning of 'mother' so, one who has three mothers - and applies to Agni; the mothers being sky, the middle space and the earth (hence he is the Sun, lightning and fire). Agni and Rudra are often considered one - hence the transference of the name.
यजामहे - we worship, adore, honour (ĀP, 1st person, plural, active, present - 'we' √yaj)
सुगन्धिम् - fragrant (accusative case), adj. for Shiva
पुष्टि-वर्धनम् - giver of the state of nourishment - (acc. case) adj. for Shiva
उर्वारुकम् - musk-melon (neuter, nominative, singular)
इव - like (a)
बन्धनात् - from bondage (ablative case, singular, of bandhana [neut])
मृत्योः - from death (ablative case of मृत्यु masc, sing.)
मुक्षीय - (I) ought to be released. (√muc, 1st person, singular, benedictive)
मा - not
अमृतात् - from immortality, (ablative case of अमृत, sing.)
ॐ

The translation then becomes:

We worship [the] fragrant Shiva, increaser of nourishment;
Like the musk melon [is] released from its bond, I should be released from death, not from immortality.

(Here of course we are assuming that the bondage/bhandhana of the fruit is to its plant/creeper/vine. And as it ripens, it falls on its own. Hence, once we have ripened, i.e. lived our lives, we should be separated from this existence. But these are meanings we assign. I have mine just like everyone else will their's.)

Posted by Rohini Bakshi at 4:35 am

we are praying Lord Ishwara that He should bless that our Antahkarana would soon be ripened so that we can drop away from the 'samsaara' without causing pain either to the world or to myself. before ripening if we try to pluck a cucumber, it would pain the creeper as well as the unripe-cucumber. hence the plea to save me from any kind of 'apa-mrityu'(death before one has lived the full life, ie, seen and understood the stark realities of life)and not to take the body away before the highest objective of human life is achieved, ie, the Moksha, the parama purushaartha.


i have started learning sanskrit and I find your blogs very interesting and educative .i think you take all views which a student normally likes to know about the sanskrit grammmer
i fully agree with your method of interpretation thanks

Sorry for the delayed response. I will try my best. Thank you for your encouraging words :-)

Excellent blog posts and thank you for the same. One point to note based on the explanation of Swami Dayananda Saraswati of Arsha Vidya.

The musk melon or urvArukam is not a fruit that drops off and on it's own, as every kitchen gardener would know. On the contrary, it has to be manually cut or snapped off the climber to which it is attached. It requires an intelligent and strong gardener with a knife or a pair of garden shears to accomplish this.

Even so, we need Ishvara or Lord Shiva's grace and intervention to snap the bonds that tie us to matter. It won't happen on it's own. Otherwise the Lord's role would have been superfluous. That's why the musk melon metaphor is used rather than a mango or coconut which drop off on their own.