So far all our stories did not display sandhi. Now that we are learning sandhi, I thought it might be useful to do some stories both in and out of sandhi till we complete this section. Simply by observing the difference in the sentences, you will begin to get a feel. Once we finish sandhi, I will post the rules for ready reference. Since the focus is sandhi, I will not be specifying gender, number, case, tense as I normally do. I trust you are fairly familiar with these by now. If you are new to the blog, please see earlier posts in Aug/Sept. In any case, if you have any doubts/queries/observations,  please leave a comment or write to me. 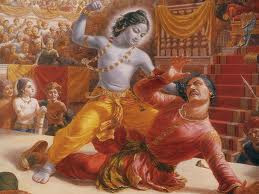 Kaṃsa was on his seat

He saw the death of Cāṇūra

कंसस्य केशाः कृष्णेन गृहीताः सन्ति
No sandhi changes take place in this sentence. Note that  both before the 'k' and the 's', the visarga is retained.

Krishna threw Kaṃsa from his seat to the ground

O my! O my! The people cried

अहो अहो इति जना अक्रोशन्
Aho! Aho! is an exclamation of joyful (or painful) surprise. Please note that this expression is NOT subject to sandhi. For advanced students who are following this course to revise, the the rule for this in Panini's Astadhyayi is A.1.1.15.
The only sandhi change is the the visarga of  जनाः  is dropped before the 'a' of अक्रोशन्

Flowers fell from the sky

Everywhere there was joy

* anusvāra is the dot on top of the word which indicates a nasalisation
** avagraha is the 's' shaped mark which shows an elision - i.e. something has been removed that was here before.

I would like to thank Dr. Alastair Gornall and the members of my Classical Sanskrit Course at SOAS for their help in clearing any doubts I have on grammar.