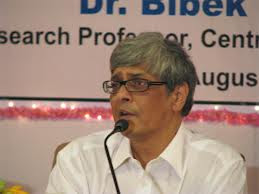 Let’s briefly take stock of where we are in our explorations.  At the moment, we are on the ātman or the jivātman, with the two terms being used interchangeably.  Nothing beyond that has come so far.  Let us think of the terms ज्ञान and विज्ञान.  How will we translate these terms?  Jñāna is easy, it is nothing but knowledge.  What about vijñāna?  This is a little bit more difficult.  In today’s usage, vijñāna has come to be identified with science. However, that’s not what vijñāna originally meant.  Originally, vijñāna meant knowledge, but of a different kind. There is a difference between the jñāna kind of knowledge and the vijñāna kind of knowledge.  The vijñāna kind of knowledge is more like understanding, wisdom and comprehension.  Jñāna is what I learn from the external world, from books and from teachers.  Vijñāna is what I learn from myself, through inner contemplation.

The ātman is the domain of vijñāna, not jñāna.  It cannot be comprehended through the senses, or through apparatus of measurement and the external world.  Someone asked me why I have been quoting from the Bhagavad Gita, but not from the Upanishads.  The reason is simple.  I do not wish to burden this exploration with unnecessary quotes and Sanskrit.  I will quote later, when we go beyond the existence of the ātman.  For the moment, since someone wanted a reference to the Upanishads, on the ātman, here is a śloka from the Kaṭha Upanishad, without the Sanskrit and with a free translation.  “If an inferior man (teacher) thinks a lot and instructs you about it (the ātman), that doesn’t mean you will get to understand it well.  It is only if you are instructed by one who does not differentiate (between the ātman and the brahman, that is, the person is a better teacher), that you will go beyond the debate.  So far as measurements go, there are objects that are smaller than atoms (anu).”

What is science? That’s a specific kind of knowledge too. And what is technology?  It is an application of knowledge.  What’s the difference between a discovery and an invention?  Without getting into intricacies of intellectual property law, a discovery is finding out about knowledge that already existed.  The knowledge hasn’t been invented. It is just that no one knew about it.  There are no inventions in science.  Science is only about discovery.  It is technology that provides the stuff of inventions.  We divide our sacred texts into श्रुति (śruti) andस्मृति (smṛti).  Apart from being passed down through oral tradition, śruti has no identifiable composer.  It is revelation, the knowledge is being revealed.   Therefore, even though scientists may throw a fit at this statement, science has ingredients of śruti.  Thus, before we are arrogant about the wonderful knowledge that science has discovered, shouldn’t one be a bit more humble about not having known all that there is to be known?

Contrary to what you might think, I have read a lot of Richard Dawkins, probably one of the most famous authors against religion.  Part of the Dawkins argument is based on his belief in evolution, as opposed to those who believe in a creator God.  As I have explained before, a creator God is not what we are talking about.  The second strand in the Dawkins critique is lack of evidence and we have talked quite a bit about this too.  The third strand is that a lot of evil things have been done in the name of religion.  Perhaps, but a lot of good things have also been done in the name of religion. The good far outweighs the bad.  A lot of wars have been fought over women. Their faces have launched thousands of ships.  Does that mean women are bad?

रुपं देहि जयं देहि यशो देहि द्विषो जहि.  This will immediately be recognized, at least in some parts of India.  “Give me beauty.  Give me victory.  Give me fame.  Slay my enemy.”  This comes from a prayer to the goddess, from a section of the Mārkanḍeya Purana known as “Chandi”.  I have contested this notion of god/goddess.  Etymologically, the words deva and devi are linked to the Sanskrit root for shining, radiance(√div). They have nothing to do with gods who are creators.  There is a story of Nala and Damayanti in the Mahabharata.  In particular, there is a story of Damayanti’s svayamvara, where she is going to choose a bridegroom.  She wants to choose Nala of course.  But Indra, Agni, Mitra, Varuṇa turn up, all disguised as Nala.  Confronted with five Nalas, Damayanti doesn’t know who to choose.  However, she soon realizes that these gods have traits that are not human.  They do not sweat.  They do not cast shadows.  Their garlands do not fade.

Every once in a while, we will be told Hinduism has 330 million gods/goddesses.  That’s not quite true and the confusion probably happened because the word कोटि came to be misinterpreted as crore rather than category.  Hinduism did have categories – 12 Ādityas, 11 Rudras, 8 Vasus, Indra and Prajāpati.  For our purposes, that evolution of the number isn’t important.  What’s important is that these aren’t “God” in any sense.  Many of them are temporary title-holders.  They were temporarily appointed to those titular positions for a certain period of time.  At best, they have certain powers that are more than human and more traits of divinity.  The quality of divinity exists in all of us.

Nor do these divinities have powers to provide special dispensation and favours.  The film “Oh My God” makes fun of such contractual arrangements with gods/goddesses, rightly so.  “If you give me this, I pledge to do that.”  Most of the time, we ask for the wrong things.  That apart, I think these apparent contractual arrangements serve two purposes.  First, when one is in difficult straits, they have a placebo treatment kind of effect.  (They probably also have a nocebo element, but let’s ignore that.)  In some countries, I will probably go to a psychological counselor.  What’s wrong with going to a temple or a god/goddess?  There is a second kind of purpose, but we will save that for later.
Posted by Rohini Bakshi at 11:40 am

Great article sir. Regarding the no. of gods the conversation of Yajnvalkya with other saints in Brihadaranyak Upanishad is a masterpiece. Therein gods can be termed as universal principles or laws.

Great article sir. Regarding the no. of gods the conversation of Yajnvalkya with other saints in Brihadaranyak Upanishad is a masterpiece. Therein gods can be termed as universal principles or laws.

Seriously, there can be no contract with Brahma other than the Prathoma Upanishad. Even the Virinchi (creative, Narayana (preservative) and Shankara (entropic) aspects of Brahma and all of "free will" within Brahma's creation are governed by "Karma and Dharma". As you sow, you reap. Prathamo Upanishad makes this plain. The rest is illusion. Prajapathi (Avatar of Brahma) tells the Saptha Rishis (Atri, Bhrigu, Kuthsa, Vasishta, Gautama, Kashyapa and Angirasa - the patrilienal ancestors of all Brahmins), that Manu (shya) was created to build a heaven on Earth (Dharma) on the three principles of truth, virtue and beauty and within the ambit of the divine law of charity, mercy and moderation. Every step Manu takes towards this (karma) will bring him untold joy. Every step Manu takes away from this will bring him untold sorrow. Manu is the immortal soul (not just the temporary animal body abode). The Manu does not transmigrate across species but is always Manu. (The concept of evolving thorugh animal forms is a later (Budhist) contamination)

Agree with your ideas accompanied by references. Apparently our system is polytheist. The vital reason behind that is our ability to accept every culture. In ancient times our 'Rishis' tried to amalgamate small cultures into giant Vedic concept. In doing so, different deities got merged into our system of worship. Although, we have strong monotheist conception.