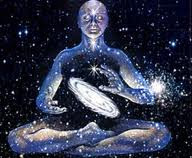 In Him* is the highest limit of omniscience

In the previous sūtra we dwelled on the who/what Īśvara is. Now we consider his/her/its special characteristics. In this sūtra Patañjali says that in Īśvara we find a level of omniscience that is unsurpassed.

*Him is used for simplicity of translation here, as well as the undeniable fact that the spiritual principle puruṣa is conceived of as male and prakṛti, the material principle as female in sāṃkhya. However in actuality, in the Hindu tradition alone we have definitions of the Divine as female as well as the gender-less Brahman.
Posted by Rohini Bakshi at 4:04 am