Bāṇabhatta was a poet in the court of the 7th century King Harṣavardhana of Kannauj. He is considered one of the brightest stars in the galaxy of Sanskrit Kāvya and is best known for his prose work ‘Harṣacarita’ a biography  of the king; and Kādambari, which is one of the world’s earliest novels in the world.

Here I translate Bāṇa’s description of King Harṣa when he returns to the court after a hiatus. What is unique about this text is it is the first time the grandeur and royal grace of the king is not glorified by comparing him to mythological heroes and gods. Rather, Harṣa transcends them in his practice of the ‘rājadharma’. The faults of the gods are detailed to show what a good king he is. I must say I was pleasantly surprised, and believe it to be a testimony to the tolerance of 7th century Hindus. The translation starts from  "so 'yam..." at the end of line 1 and ends at śṛyaḥ: 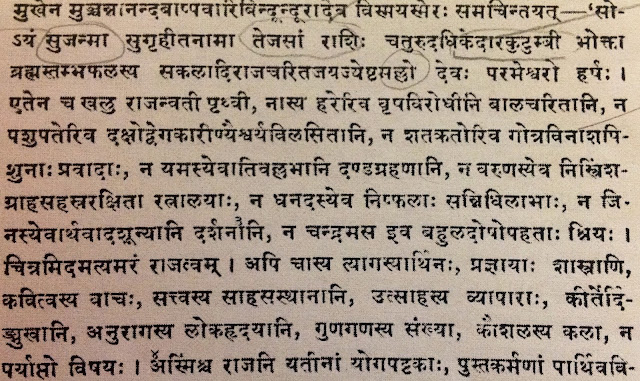 The basic sentence is: 'This was [the] Lord, [the] king, Harṣaḥ.' And between the beginning and end of the sentence are a series of descriptions. He is:


सुजन्मा - well born
गृहीतनामा - whose name is well received
तेजसां राशिः - a collection of splendour, radiance
चतुरुदधि केदार कुटुम्बी - [like] a farmer who's field is the [world with] four oceans
भोक्ता ब्रह्मस्तंभ फलस्य - enjoy-er of the fruit of all creation
सकलादिराजचरितजयज्येष्ठ मल्लो  - wrestler [who has bested] the doings [record] of the earliest kings (like Manu and Prithu)
With/By him (etena) the earth was indeed (khalu) possessor of a good king (rājanvati)

The next basic sentence is: His glory is not... (न अस्य श्रियः), and in between नास्य and श्रियः we have a list of thing that his glory is not:

His childhood actions are not anti-dharma (vipravirodhini) like those of Krishna (hareriva)
Nor like Shiva (paṣupateriva) whose state of being a mighty Lord was the cause of the distress (udvega) of Dakṣa
Nor are words/reports [of his actions] like those of Indra [who was guilty of] killing a tribesman (might also refer to him battling a mountain, as gotra means mountain also)
Nor is he fond of wielding the danḍa [of punishment] the way Yama is
Nor does he guard his treasure(s) with fearsome monster[s] (nistrinśagrāh) like Varuṇa
Nor is an assembly with him fruitless as it is with Kubera
Nor is his philosophy (pl.) [about] void[ness] like that of Buddha [jina]
Nor is his splendour marked,  blotted like that of the moon.

If you wish to read this masterpiece of Sanskrit prose, you can buy it here:
http://books.google.co.uk/books/about/The_Harshacharita.html?id=91yI040vbT8C&redir_esc=y (links are on the side)

If you are in India you can also buy it from mlbd.com and Flipkart.
Posted by Rohini Bakshi at 8:55 am

Rohini-
Just a thumbs up on the format of the devanagari text as posted - easy to read and zooms large w great clarity, even on my blackberry. Once again, thank you for your work -
Wayne

Lovely! The beauty of our past is buried in the Sanskrit and Tamil poetries... It's a treasure invaluable, thanks for digging one for us. Keep the good work.

Thank you for the good writeup. It in fact was a amusement account it.
Look advanced to more added agreeable from you! However, how could we communicate?
Feel free to surf my website : http://www.wikitronic.de/index.php?title=Benutzer:AdamCarab

Hello just wanted to give you a quick heads up. The text in your
post seem to be running off the screen in Opera.
I'm not sure if this is a formatting issue or something to do with internet browser compatibility but I figured I'd post to let you know.
The layout look great though! Hope you get the issue resolved soon.
Kudos ageless male - ageless male health - ageless male

Take a look at my webpage :: http://svet.blindage.org/doku.php?id=upper_body_coach_program_and_gynexin

I've been browsing online more than 2 hours today, yet I never found any interesting article like yours. It's pretty
worth enough for me. In my opinion, if all ωebѕіtе oωnеrs anԁ bloggeгs made good contеnt аs уou diԁ, the
іnternet will bе much mοre uѕeful
than ever before.