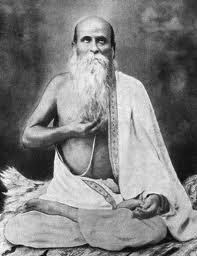 It (abhyāsa)* becomes firmly grounded [in being] continued for a long time, without interruption and with reverent devotion.

In order for the practitioner of yoga to be firmly established on the path of yoga, three conditions need to be fulfilled, as outlined in this sūtra:

a) it must be practised for a long time
b) it must be uninterrupted
c) the endeavour must be accompanied by devotion, in a spirit of reverence

* BKS Iyengar reads this as:

Long, uninterrupted, alert practice is the firm foundation (for restraining the fluctuations).

While the sentence is perfectly valid, I don't agree with his translation because भूमिः which he is reading as foundation (that's fine) is a feminine noun. So it would have  been सा instead of सः at the beginning of the sūtra.

Posted by Rohini Bakshi at 6:52 am

Could I ask your profesional opinion on this blog: http://yoga-sutra-comment-eng.blogspot.com/

Rohini -
the thought occurs to me today that you are somehow perfectly poised to be very useful in this work - somehow, I have to say, for from the sociological, political, historical factorings, you'd hardly think so -- but then, it is precisely your strength, it seems, again somehow which I don't understand, that you are destined to be heard, listened to.
That's my hunch.
the sound vocable नैरन्तर्य - I believe carries a great weight- I believe it means that there will not be a moment in this practice that is not at some level continuous-this will require that the work go on even in "sleep" - at every level, there will be the awareness that abhyAsa is going on.
I would love to be more concrete in my comments, but my major purpose is to cheer you on and to caution a patience, especially in that we have here a reminder that this proces is carried on over a long period of time -
You are gathering an audience for your work. I hope I can be of some service in this regard.
Respects.
Wayne