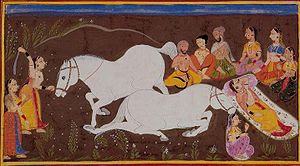 Bṛhad-āraṇyaka upaniṣad is the concluding section of the Śatapatha brāhmaṇa of the white (vājasaneyi) yajurveda. By tradition and on linguistic grounds, it is considered the oldest, and is the most important of the upaniṣad. Even the most conservative scholarly opinion places it at c. 800 B.C.E.

The opening verse outlines the equivalence between the sacrificial horse and the cosmos. The anatomical detail and cosmic equivalence clearly marks a transition from the sacrificial tradition (karma-kāṇḍa) to the pursuit of knowledge (jñana kāṇḍa) in the Brāhmiṇical scriptures.

Vājasaneyi is the patronymic of the sage Yajñavalkya, who tradition has it, founded this school. He plays a central role in propounding some of the key ideas of the Bṛhad-āraṇyaka upaniṣad, which were to inform Uttara Mimāṃsā (Vedānta) thinking centuries later. The text has been preserved in two rescensions - the Mādhyandhina and the Kāṇva. This translation comes from the Kāṇva rescension. I have taken the support of S. Radhakrishnan's and Patrick Olivelle's translations. It's a tough text to comprehend, and absorb, so I'll only be doing one verse at a time.

* Both S. Radhakrishnan and Olivelle translate आत्मा as body.
Posted by Rohini Bakshi at 8:11 am

and the RK Mutt's version?