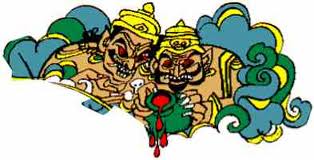 I do apologise for all the pencil markings!! Trust it's still good to read. Please write in if you have any specific problems with the text. 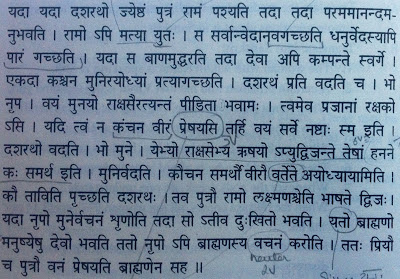 Whenever Daśaratha saw his eldest son, he experienced (anubhavati) the highest joy. Rāma too was endowed with intelligence. (lit. joined with). He understood (avagachati) all the vedās. And excelled (lit. went beyond) at bowmanship (dhanuraveda). When he lifted an arrow (uddharati) the gods also trembled in heaven. Once, some muni came to Ayodhyā and said to  Daśaratha."O King! We munis are troubled by rākṣasas. You only are the protection of your subjects. If you don't send (preṣyasi) some brave [person] then we are all doomed" (lit. destroyed).Daśaratha said: " O Muni! Such demons who [can] cause ṛṣis to tremble, who is capable of killing them?" The muni said: Two such capable brave [men] are (lit. exist vartate) in Ayodhyā. Who are they, asked  Daśaratha."Your sons Rāma and Lakṣmaṇa said the brahmin. When Daśaratha heard the words of the muni, was was very unhappy. Since [a] brahmin is [a] gods amongst men, therefore even the king must do what he says. Therefore he sent his beloved sons to the forest with the muni.
Posted by Rohini Bakshi at 3:41 am