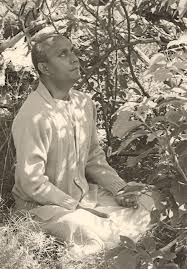 The Yoga Publications Trust, Mungher, Bihar begins it's commentary on Patañjali’s Yogasūtras with a delightful story in which a heated debate is going on between some pundits on the definition and correspondence of the types, or stages of samādhi. Of savitarka, nirvitarka, nirbīja, sabīja saṃprajñatā asaṃprajñatā and so on. The pundits start yelling at each other and nearly come to blows. Just then a fat, contented cow ambles into the lawn, sits behind them and suddenly bellows M-o-o-o-o-o-o-o- making them jump in fright. The author says that the moo-ing of the cow was the most intelligent contribution to the debate - because Patañjali’s Yogasūtras are meant to be experienced rather than intellectualised.

I.K. Taimini adds another insight. He says, reading Patañjali’s Yogasūtras is like holding a paper map in your hand. Everything is marked out - the hills, the rivers, the boundaries, the distances - but till you visit that land and see it for yourself, you'll never know what it's really like.

With this in mind, we move to one of the most complex couple of sūtras, regarding the nature of samādhi.Difficult in themselves, and difficult because we have to understand them without the support of key yogic concepts which we will only meet in Chapter 2, the Sādhanā Pāda.

saṃprajñatā is [that state of mental concentration] which is accompanied by reasoning, reflection, bliss and a sense of individuality.