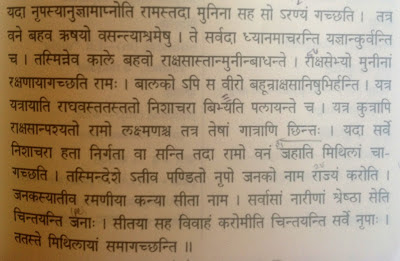 When he obtained the permission of the King, Rama went along with the muni to the forest. There, in the forest, many rishis lived in ashrams. They always meditated and did sacrifices. During that time many demons obstructed them. To protect the munis from the demons, came Rama. Even though he was a boy, that brave [Rama] killed many demons with arrows. Wherever Rama went, [from] there the demons were scared and fled. Wherever Rama and Lakshmana saw [the] demons (there) they cut off their limbs. When all the demons were killed or departed, then Rama leaves the forest and goes to Mithila. In that country a very wise king named Janaka ruled. Janaka [had an] extremely charming daughter named Sita. The people think she is the foremost amont all women. All [the] kings thought 'I will marry Sita' Therefore they assembled in Mithila.
Posted by Rohini Bakshi at 12:30 am

I want to know where exactly to paste the code on my template within my blog so that the 'Digg It' Button shows up for every and every post of mine.
.. Also Basically want to show how many diggs I got on a single of my
blog post where do I show it? Where exactly will i place the code?

And where should i obtain the code from? Thanks for helping me using this.
.

Feel free to surf to my homepage - http://www.braggingit.com/index.php?do=/blog/94351/insights-on-effective-methods-in-transvaginal-mesh

Hi! This is my first visit to your blog! We are a collection of volunteers and starting a new project in a community in the same niche.
Your blog provided us beneficial information to work on.
You have done a marvellous job!